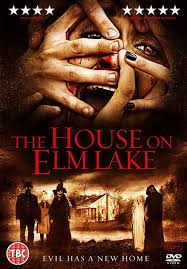 House on Elm Lake is a British thriller/haunted house/ghost story from Wild Eye Releasing. Interestingly enough, it is also a remake…kind of. In 2014, a film called Lucifer’s Night was released. Directed by Henry W. Smith from a script written by Louise Bennett and Tyler James, it was originally slated to be a short film, but ended up working itself into a full-length feature. The plot was essentially the same as House on Elm Lake, with many of the same actors in the same roles they would later reprise. A few years later, and there’s a script re-write by Shannon Holiday, a new director in James Klass, a few new faces in the cast, and a larger budget, which all helped to breathe new life into the story.

Eric (played by Andrew Hollingworth, one of the new faces in this reboot; originally played by Seth Papworth) and Hayley (Becca Hirani) and their daughter Penny (Faye Goodwin; a holdover from the original cast along with Hirani) have just moved into a new place in hopes of a fresh start, but almost immediately things start looking bad. Eric finds a creepy book bound in snake skin in the old shed, and as he looks at the disturbing photos and drawings and ramblings inside, a hand reaches out toward him from of a blood-filled sink. Later that night, he swears he sees a naked old man walking down the hall. When he and Hayley check on Penny, she is holding a burnt up, old, ugly doll she found, and once they leave her room she resumes talking to her “new friend.” Hayley’s “real” friend Crystal (Lorena Andrea, who also co-starred with Hirani in Unhinged) stops by and is convinced that the great deal they got on the property is too good to be true, and eventually the two find out the truth: a previous owner had gone mad and ritualistically killed his wife and young son in the house. The assumption that this story will follow a familiar path, and that things will only get worse for this young family, is a correct one.

There is a strong The Amityville Horror vibe in House on Elm Lake, but mostly in theme, not specifics. Once things start getting weird, Hayley and Crystal essentially throw the haunted kitchen sink at the problem. They do some research online, which is when they learn of the murders. They use a Ouija board, and are told by “Miranda” that they are not safe. They call in a psychic (Julie, played by British TV star Tara MacGowran) who sees horrible visions immediately and essentially loses her mind, storming out and seeking refuge in a church which she refuses to leave. Throughout all of this, Penny, who seems a little too old to be acting and reacting the way she does (perhaps her age fit the script better the first time around?), is busy playing with her new friend Smithy (Oliver Ebsworth), who no one else has seen, while Eric is in a downward spiral – strange sores are appearing on his body, he’s hearing voices, and it seems like every time he tries to get intimate with Hayley, he has visions of either a naked old man (Elliot, played by Tony Manders) torturing his family or of Hayley naked and covered in blood. Brutal violence is the logical next step, and little does Hayley know, that has already manifested as well.

The story of House on Elm Lake is fairly solid, even if bits and pieces here and there seem a little bit too familiar to the well-versed horror audience. The film opens with a flashback of the previous murders in the house, so there is no mystery there, but there are unexpected twists as the story moves forward. Crystal has a secret that is not revealed until much later, one that retroactively build both the characters and the tension. The haunting/possession of Eric builds slowly, tricking the viewer by showing him fine at one point, the next pissing blood and following mysterious cloaked figures into his shed, and then bringing him right back to “normal,” or at least what seems to be. There are a handful of decent scares, and while the film is not overly gory, there are some nasty moments here and there. The team of Charlotte Hawkins on makeup (she also plays Beth, a really shitty babysitter) and Broa Sams on special effects (as well as design and props) makes sure the gruesome parts look their best. And while the closing scenes get intense, the action rushing at rapid fire speed to ensure maximum carnage in the final minutes, it is the final scene that leaves the audience with an ominous, haunting feeling.

House on Elm Lake is not a perfect movie, but it does well for its size and budget. I have not been able to locate Lucifer’s Night, so unfortunately I’m not able to give an accurate comparison between the two, aside from cast and crew details. This film manages to deliver on the scares and the creepiness while holding onto a somewhat nihilistic edge up until the end, even when it seems at times that it might opt for a happily-ever-after ending. The acting is adequate, the story is interesting, and the bloody and gross parts look bloody and gross. While this is certainly not a Hollywood cast, there are only a couple of casting choices that might be pointed out as shaky, and even then the movie still works. And let’s remember that this is James Klass’ directorial debut (he also worked with much of the same cast on a film called 12 Deaths of Christmas, aka Mother Krampus, released the same year), making himself an up-and-comer to keep an eye on. Taking all of this into account, House on Elm Lake is probably even better than it should be, and that’s a compliment.