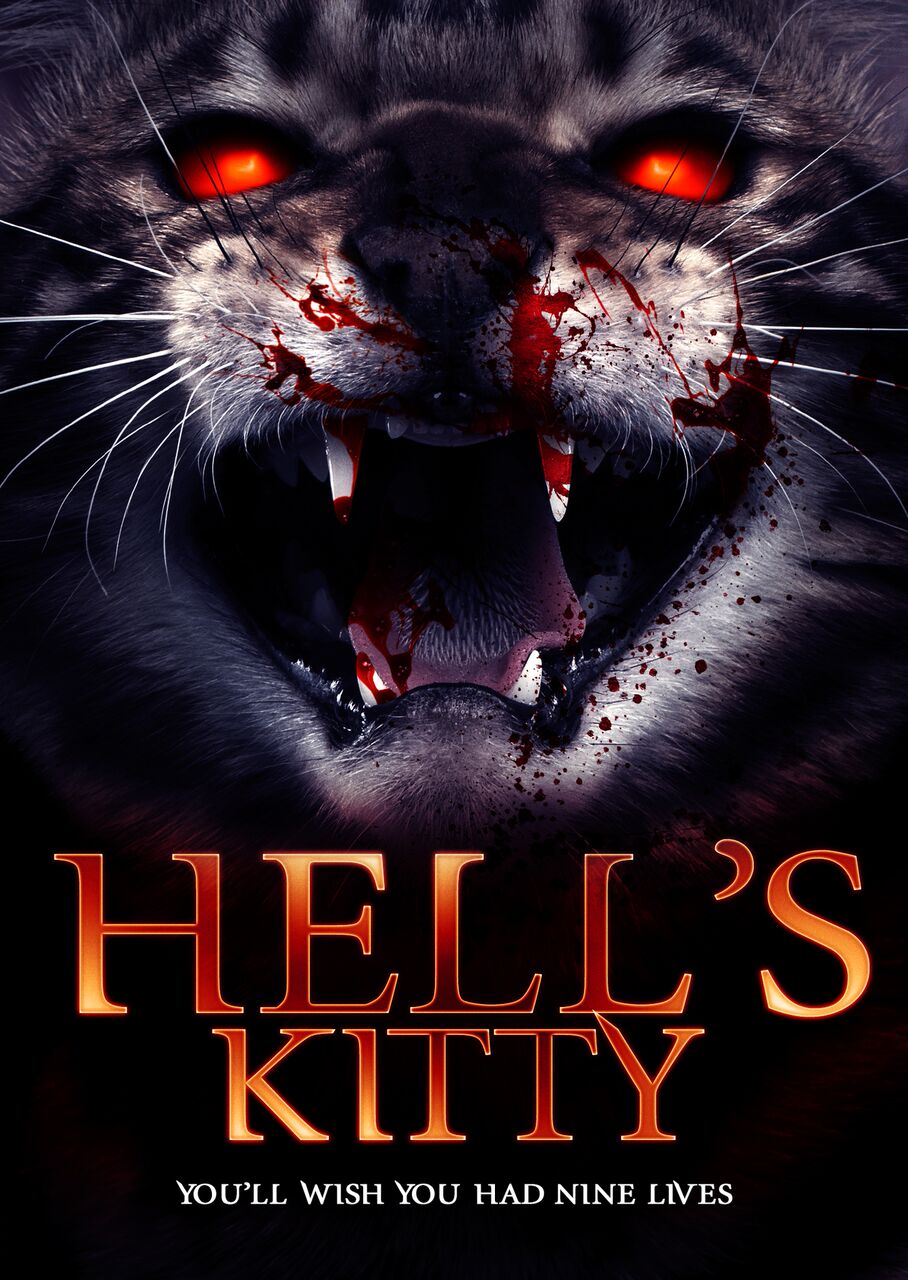 Nicholas Tana either loves to hate his pet cat or hates to love her, but either way, he has definitely found inspiration in her antics. He has created a 19-part web series and a comic book focused on Angel, his crazy kitty, and now he has put his ideas all together in the form of his full-length feature debut, Hell’s Kitty. The film centers on the idea that Angel is extremely possessive of her owner, to the point of violence, and ends up a horror comedy (more emphasis on the comedy side) that features almost as many obligatory “pussy” jokes as it does horror legend cameos.

Unless I’m mistaken, the film version of Hell’s Kitty is essentially the episodes of the web series trimmed down a bit and then tied together with a story woven throughout. What that means, of course, is that if you’ve already seen the web series, then you’ve already seen most of this. Nick (played by writer/director Nicholas Tana) has a pet cat that refuses to allow anyone else to get close to him. When he brings a date home, (Lisa, played by Lisa Younger), Angel scratches her so hard she draws blood. Needless to say, this date ends quickly, but Lisa reappears in Nick’s nightmares as well as in her threats of a lawsuit. Our other main character, Adam (Adam Rucho), is Nick’s friend and neighbor who pops in now and then to help increase the insanity of the all-over-the-place story. Throughout the duration of the film, a variety of random, quirky characters enter and exit Nick’s life as he unintentionally embarks on a series of mini-adventures.

I need to revisit something that I’ve already established to make sure it’s very clear: this movie consists of previously-separate pieces put together to make a whole. This can, at times, be a bit off-putting, because there is not a straight storyline. It starts one way, then jumps to something completely different, then pulls a U-turn and heads back the other way before turning in a new direction. Luckily, there are some consistencies: Nick and his cat are constants throughout, with Lisa and Adam and Dr. Laurie Strodes (Nina Kate) making semi-regular appearances as well. The stories are being told by Nick to someone off-camera (which is the glue that sticks the various episodes together), and so are shown as flashbacks with a bit of narration accompanying them. There are far more jokes than scares, with quite a few of them landing while others fall a little weak (but isn’t that the case with most comedies?), but the main draw is the busload of familiar faces making their cameos.

Nina Hartley (adult film legend) plays Ms. Rommel, a “professional” that Adam suggests might be able to help Nick – although a professional what he doesn’t mention. Nick’s grandmother, who has a way with cats, is played by Lee Meriwether, Catwoman from the old Batman TV show. Michael Berryman (The Hills Have Eyes) plays appropriately-named Detective Pluto, who’s investigating a disappearance. Adrienne Barbeau (The Fog) plays an -ex’s mother and makes an amazingly sneaky Creepshow reference. There’s also a maskless Doug Jones (Pan’s Labyrinth) and Bill “hardest working actor in the industry” Oberst, Jr (Circus of the Dead) as priests; John Franklin and Courtney Gaines (Isaac and Malachai from Children of the Corn) as door-to-door bible salesmen; Lynn Lowry (Shivers) as a medium, and Kelli Maroney (Night of the Comet) as her gypsy sister; and Barbara Nedeljakova (Hostel 1 & 2) and Ashley C. Williams (The Human Centipede) as last minute Valentine’s Day dates, complete with a funny reference to Tom Six’s films. And that’s not even getting into the literal busload of scream queens or the evil spirits that pop up along the way.

Hell’s Kitty is a tricky film to discuss in a critical way. There are fun, and funny, moments throughout, but due to the very loose plot and lack of story arch, it’s tough to become invested in. It’s great to see so many of our favorites appear and make inside jokes with the audience about the roles we love them for, but does that overshadow the movie itself? Are we just watching to see the characters, as opposed to watching for the story? Does that even really matter? This movie is pretty silly, with very little in the scare department but a ton in the meta-department. It’s designed with a cat-loving audience in mind, but can also appeal to us dog lovers. If nothing else, Tana has shown us that he can write funny and can almost stretch a single joke across a full-length film, but not quite. Don’t go in with too high of expectations, and Hell’s Kitty will end up a pretty good time.