The Spirit of the Place and Other Strange Tales – Book Review 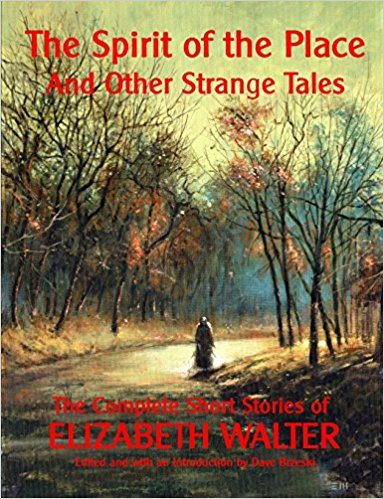 Elizabeth Walter (1927-2006) was a British novelist,short story writer and editor of the Collins Crime Club for over thirty years. As an author she has penned many stories in the field of supernatural and ghostly fiction as well as of “quiet” horror. Walter’s uncanny tales have appeared in famous anthologies such as The Pan Books of Horror Stories and The Fontana Books of Great Ghost Stories. She has published five collections of short stories: Snowfall & Other Chilling Events (1965), The Sin-Eater & Other Scientific Impossibilities (1967), Davy Jones’s Tale & Other Supernatural Stories ( 1971), Come And Get Me & Other Uncanny Invitations (1973), Dead Woman & Other Haunting Experiences (1975).

Now all the thirty-one stories previously appeared in her collections have been assembled in one hefty, attractive volume by the excellent small imprint Shadow Publishing, with an introduction by Dave Brezskj and a fascinating, haunting cover artwork by Edward Miller.

Walter’s body of work is an extraordinary example of nice plotting, great characterization, and enticing storytelling, dark and unsettling atmospheres and the ability to grip the reader’s full attention even when employing old clichés or revisting time-honoured classical themes.

To comment upon all the stories would be tedious and impossible, but I’d like to mention some of the more accomplished and rightly famous pieces.

“The Sin-Eater” is an outstanding,suspenseful example of supernatural horror where a terrible vengeance hits a murderer from beyond the grave, while “The Island of Regrets” is a very disturbing tale taking place in a haunted island in Britanny.

In the classical, tense “Snowfall,” Caribbean horrors are relocated in a snowy Welsh landscape, and in the vivid “The Tibetan Box” the tragic effects of black magic are at loose.

“Hushaby Baby” is a very clever tale of witchcraft, starting with a switching of babies and ending in sheer tragedy.

Odd family traditions come alive in “Telling the Bees,” a deliciously dark story of foresight and death, while military horrors, a talkative parrot and blackmail are the ingredients of the ghostly “Come And Get Me.”

“The Lift” is an offbeat tale where a man running from his dangerous pursuers discovers the terrible strength of betrayal, while “In the Mist” is a deceiving ghost story featuring a young RAF pilot trying to reach his camp.
Walter’s astonishing storytelling ability is particularly evident in some of her “minor”stories such as “The Travelling Companion,” an enticing piece of insightful fiction despite its rather predictable ending, and “Prendergast,” a dark story of child killings and vampirism with a nasty twist in the tale.

In short, a wonderful volume collecting all the eerie and uncanny tales of a real mistress of dark fiction.