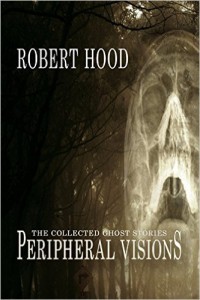 When I read the summary of this collection, my heart skipped a beat. Melancholy reflections? Disquieting? Chilling visions of ghostly apocalypse? What more could one ask for in a book? As the mists settled over Red House, I cracked open this near 800 page tome. You see, Peripheral Visions contains every short story Hood has written to date, plus some fresh offerings. This should be brilliant.

Unfortunately, the collection failed to resonate. There was a great deal more I would have asked for in 800 pages. Robert Hood’s stories are good. His ideas are good. His prose is good. Yet therein lies the problem. He is good, but not great. He is good, but that’s just not enough. In almost four dozen stories, not one really stood out. “Nobody’s Car,” from the first section “Haunted Places,” was interesting, but it wasn’t particularly unique. From pixies to the Nazis, it felt as if we had read these stories from someone else in another collection somewhere in time. They lacked originality of prose and originality of theme. Of course Rudolf Hess would haunt Spandau. Of course the son hates “mother” and wants her dead. The “ghost” the little girl sees is, of course, her adult self. When the stories strayed from the usual horror suspects, they wandered into that nether region between horror and science fiction. Truth codes, Birthing Evaluations, Lunar Sea Projects, and other sci-fi elements drift amidst the phantoms and shadows. It works if you like this blend. If you don’t, the stories wander into the bizarre, and many never return.

This collection features a lot of good, forgettable stories. There are no rich thematic aspects that stir four hour conversations. The plots are obvious, and the characters predictable. There is the usual cast of monsters with the usual action/ adventure tossed out in the right places. For fans of horror on the large or small screen rather than books, this collection might interest you. The stories have all the elements of an episode from Tales from the Crypt or another of the serial anthology style shows. For fans of horror in the Gothic tradition on the 1800s, however, this collection will be less than satisfying. For those fans, I would recommend skipping Hood and heading straight to M.R. James or Sheridan Le Fanu.