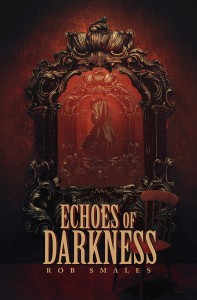 This is proving to be the year of the short story collection. Fresh on the heels of several great collections, I recently crossed paths with yet another. This one, Echoes of Darkness by Rob Smales, continues my belief that we are in a renaissance of the mini tale.

Smales is a New England writer, but his stories will take you across time and space. Instead of steeping his stories with only New England terrors (naturally very tempting for a horror writer), Smales takes his readers into the shadows of many worlds. Echoes opens on a dusty trail in the middle of somewhere vaguely western. Where are we? No, Smales demands an even more challenging question. When are we? Hints of zombies lace the early paragraphs. Death is close at hand. But is this the past? The future? By the end, we no longer care. The weight of death hangs everywhere, and, like the characters in “Death of the Boy,” we can taste it.

A lot of genre relies on standard tropes with traditional endings. Smales tosses the traditions of genre by taking classic tropes like zombies, and giving his readers a wicked twist in the end. We all know how zombie stories end, right? Think again. “A Night at the Show,” the second tale in this collection, illustrates the Smales touch wonderfully. A werewolf story. Nicely done. Well-written. Fantastic characters, and then… the end. Woah! Was that what I expected? Not in the least. I’m a voracious reader, and Smales can take me by surprise.

Smales definitely sits in the Gothic horror camp. There is little overt gore, and the stories rely on the delicate structure of narrative. If this was film, it would be Hitchcock. If this were the 1800s, it would be Le Fanu. The New England writer comes through in setting and tone. These stories are spooky. They are eerie. Some are simply terrifying. Shades of Hawthorne drift across the pages. Hints of deadly Nightshade lurk in the margins. Nightmares close in as the end approaches. Be afraid, but always read on.