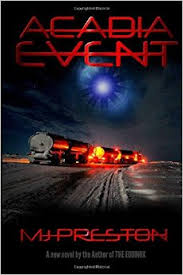 Some years back, author MJ Preston had the rare opportunity to drive what is known as the World’s Longest Ice Road. This massive stretch of frozen tundra is beautiful in a stark way, but there is no disguising the terror lurking under every crack of delicate ice. Using this haunting landscape as a backdrop, he gives us Acadia Event. Set largely in the diamond mines of this frozen territory, Preston weaves a frightening, Lovecraftian tale of nightmares.

The story centers on Marty and his wife. They live a quiet life, but Marty has secrets. Very dark secrets. One of those secrets, Gord Shamus, comes out of seemingly nowhere for “one last job.” That job involves driving the Ice Road and stealing the diamond load from the Acadia Mine. Shifting perspectives, we also meet the crew at the mine. They’ve discovered what could potentially be one of the largest diamond stashes uncovered in recent years. There is one small problem, however. The diamonds are sitting in what looks like a heritage site. The crew has burrowed into what appears to be a man-made structure full of bones. Irritated that their entire operation could be shut down, they head into the pit to take a look around. Instead of native pottery and a few arrowheads, they unleash hell on earth. As Marty heads into the icy darkness to save his wife from the sadistic Shamus, the mining crew finds themselves in a fight for their lives.

Acadia Event is, at its core, an environmental horror story. Man digs into the ground to satisfy his greed, and instead releases what eventually becomes humanity’s doom. We understand the thieves and their greed, but Preston skillfully contrasts them with the miners as a parallel story. Instead of shutting down to wait for further manpower and equipment, the crew barges into the diamond-bloated room. Ronny Fraser, one of the crew, calls the room a “monumental find.” Like Shamus, the mining crew fall victim to the glow of cash as the remote-controlled camera lights up a fortune.

The setting is critical to the terrifying build of the story. We move from Marty’s comfortable life, with its artificial safety (heat, light, food, shelter), to a world stripped bare of everything but the biting cold. Frostbite becomes a reality as the terrifying creatures unearthed begin to spread. Preston reminds us that nature itself can be the real horror in his vivid description of the Evan Lake ice crossing. In a world where we are never far from anything or anyone at any time (a simple GPS signal or cell phone call will do the trick), Preston transports us to one of the last isolated spots on the globe. Here, far from the internet, technology, and security, we face monsters of our own doing. We let them out. With climate change melting off ice caps at a record rate, Acadia Event is a frightening foreshadowing of possible things to come.

My only issue with the novel was the repetitive use of obscenities. This is a very character-dense novel. By the end of the book, I lost track of some of the secondary characters. Because of the overuse of obscenities as dialogue, their distinct personalities were somewhat lost. They all sounded the same, and I couldn’t really focus on each as an individual.

This is a minor flaw in an otherwise gripping tale. The action moves, and MJ Preston draws you into a world few of us will ever experience. The Ice Road alone is captivating, and the idea that we are up there digging deeper and deeper into the unknown is skin-crawling. As I drifted through the incredible photographs of this haunting world that come at the end of the book, I could not help but pause to consider a very disturbing thought. What did MJ Preston find in his travels so far north? Is Acadia Event fiction, or cleverly disguised truths that we are not prepared to handle right now? Either way, hitch a ride. You won’t regret it.