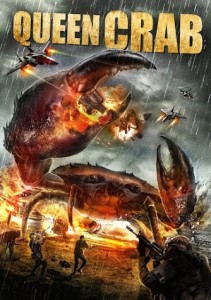 I should have known what to expect from Queen Crab when I realized it was directed by Brett Piper, the guy responsible for 1990’s A Nymphoid Barbarian In Dinosaur Hell. My friend Joan and I rented that one years ago as a joke for a ‘Who Can Find the Dumbest Movie Contest,’ and it came in second place. So, I honestly should not have been surprised by what Queen Crab had to offer. Still, I’m a sucker for just about any creature-feature, so I gave it a look. Unfortunately, the ninety minutes I devoted to this film would have been better spent cleaning my bathroom or doing just about anything else at all. The stop-motion special effects were decent, but they’re not enough to save this bomb.

If you are not familiar with Queen Crab, here is the plot synopsis courtesy of Wild Eye Releasing:

A meteor crashes into a quiet lake in the remote countryside and awakens a centuries-old beast, who tears through a nearby town and its inhabitants, who must fight for their lives and stop this Queen Crab before she can hatch an army of babies. Bonus features include: Special Effects Featurettes, Behind the Scenes Featurette, Blooper reel, Director’s Commentary , Sneak Peak: Triclops, Trailers

The primary component that kills Queen Crab from the start is the super low-budget quality the film has from the opening scenes. This is a huge contrast from the DVD cover and the opening credits; both sucker the viewer into thinking this is a bigger-budget movie that will entertain and thrill. But when the opening credits end and the movie starts, the opposite becomes evident very quickly.

The film quality looks as if the production crew used an old VHS camcorder to shoot the movie. This could be overlooked if it was done to make the film look old, however that’s not the case. The movie is set in modern times but simply looks cheap and crappy.

Likewise, the acting in Queen Crab is absolutely horrible. This is the second nail in the proverbial coffin. I wanted to overlook it, but there’s no way to do so. Aside from the fact the casting decisions were terrible, the people (I cannot call them actors) who fill the roles cannot act to save their lives. Again, if this was intentional, it might lend a bit of offhanded charm to the film…but again, it’s not done on purpose.

The only somewhat saving grace for this film is the stop-motion effects used for the crab. These  actually looked pretty good, and they were blended in with the film fairly well. But, even so, this isn’t nearly enough to save the film.

Queen Crab is a definite no for me, and I cannot recommend it at all…unless you are looking for a cheap creature-feature that will annoy you instead of making you laugh. I’m not sure what vision director Brett Piper had for the film, but I doubt it was this. The film is available today if you want to give it a look.