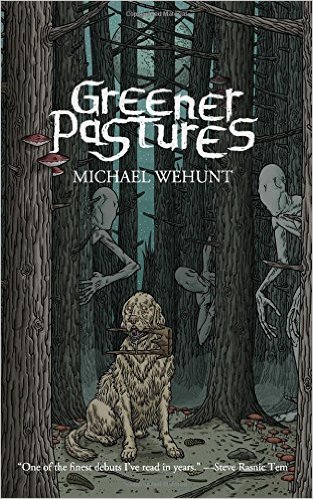 The short story is a beast every author strives to tame, but some never quite succeed. Others, however, not only tame it, they beat it into submission and force it to obey. Such is the case with author Michael Wehunt. His recent release, Greener Pastures, is a testament to what talent and hard work can bring about. This collection of shorts is one of the best I’ve read in a long time, and I wager we will see more great things from him in the future.

If you are not familiar with Greener Pastures, here is the book’s synopsis courtesy of Shock Totem Publications:

In his striking debut collection, Greener Pastures, Michael Wehunt shows why he is a powerful new voice in horror and weird fiction.

From the round-robin, found-footage nightmare of “October Film Haunt: Under the House” to the jazz-soaked “The Devil Under the Maison Blue,” selected for both The Year’s Best Dark Fantasy & Horror and Year’s Best Weird Fiction, these beautifully crafted, emotionally resonant stories speak of the unknown encroaching upon the familiar, the inscrutable power of grief and desire, and the thinness between all our layers. Where nature rubs against small towns, in mountains and woods and bedrooms, here is strangeness seen through a poet’s eye.

Every story in Greener Pastures is written well and flows at a nice pace. Wehunt focuses on telling the story in a straightforward but poetic way, yet he does not waste time with unnecessary prose. His dialogue is crisp and credible, and I never once fuddled over the message being conveyed.

The characters in the stories are damaged and believable. They are presented in a realistic manner and many could be your next door neighbors or the folks across the way. This lends more credibility to each tale and deepens the immersion level.

I had a hard time picking a favorite story out of Greener Pastures, but if I were forced to name one, it would have to be “Dancers.” In this story, a middle-aged woman tries to come to terms with never having children, however a darkness exorcised from her husband has other plans. I love the originality of this story, as well as the metaphor used with the “dancing” trees. You’ll have to read the story to fully understand what I mean.

Greener Pastures is a big win for me, and I highly recommend it. If this debut is a precursor of things to come, then I can’t wait to see what Wehunt does next.