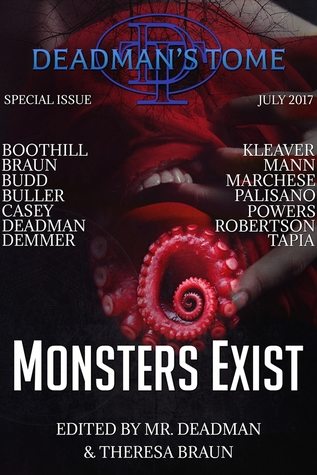 I never get tired of reading horror short stories, and I hope I never do. The artistry involved with relaying a powerful or entertaining tale in so few words takes a dose of talent and a lot of frustrating word-wrangling, and as such, not everybody who claims to be a writer can successfully create them.

DEADMAN’S TOME: MONSTERS EXIST unfortunately contains a couple of these unsuccessful attempts. Most of the stories are good, and a couple are outstanding. But a handful leave a lot to be desired. Still, I would not write off the collection as a whole because those stories that do entertain are certainly worthy of reading. Therefore, I am recommending this anthology; however, I also want you to know what you’re in for, should you purchase it.

If you are not familiar with DEADMAN’S TOME: MONSTERS EXIST, here is the plot synopsis courtesy of Amazon:

From the time we are young, we fear the monster under the bed or in the closet, making it impossible to sleep without a nightlight. Then, we hear stories of Bigfoot, and maybe even the Mothman around campfires. When we are adults, we wonder if there might actually be supernatural creatures lurking in the shadows. Are these tall tales and urban legends only metaphors for what horrific things humanity is capable of-or do monsters exist? Go to some terrifying places with this cast of authors. You will be dragged into mystifying realities where demonic fairies hide, where devil monkeys lure carnival-goers to their demise, where Goatmen seek to destroy their prey, and where the goddess of death puts out a hit on victims of her choice. These shocking tales will have you biting your nails and locating that childhood nightlight. Because, in the end, we all know monsters do exist.

I am a self-professed fanatic of monsters and creature stories, therefore this anthology immediately piqued my interest. The stories contain a nice diversity of beasties, and I like how they range from well-known cryptids to mysterious creatures I’ve never even heard of.

As stated, most of the stories in DEADMAN’S TOME: MONSTERS EXIST are written well and have strong characterizations. One in particular that contains some of the best writing (and one of the most entertaining tales) is “Wicked Congregation” by Gary Buller. This is the story of a young man who must make a regular sacrifice to a group of woodland creatures, or they will consume entire towns in retribution. I love the vivid imagery the author conveys inside the story, as well as the horrific concept that is ultimately revealed in the plot.

Another nicely put together title that leaves a mental scar is “Bitten” by Christopher Powers. In this tale, a young man visits his father-in-law, who has returned from an excursion into Africa. But the older man has not come back alone, and the creature that stalks him is the basis for many nightmares. I like the pacing of this one and how horrifying the finale turns out to be.

But for those stories in DEADMAN’S TOME: MONSTERS EXIST that entertain, there are several that do not. “The Murder of Crows” by S.J. Budd starts off with promise, but then fails to reach a climax; it ends like the author forgot where the story was ultimately heading. Likewise, “No. 7” by William Marchese doesn’t make much sense at all and comes across as a jumbled mish-mash of ideas. The resulting story lacks cohesion, and the final few sentences left me scratching my head.

Even so, DEADMAN’S TOME: MONSTERS EXIST is still a worthy read, and I would like to see what this collection of authors has in store for us down the road. Despite the lack of entertainment I experienced with those select few titles, I’d still love to see how their authors measure up in future projects, so I hope they indeed continue to hone their craft. As for this anthology, I didn’t lose any sleep, however I will confess to a haunting nightmare here and there. I certainly won’t be visiting any decrepit old churches anytime soon…

DEADMAN’S TOME: MONSTERS EXIST is available now in a variety of formats.