Q & A with Ramsey Campbell 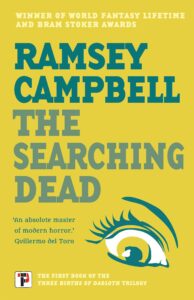 There had been a few before I wrote my first tales that were published. At eleven I put together a book of short stories, Ghostly Tales – put together rather in the sense that a Frankenstein monster in a low-budget horror movie might be, with bits salvaged from favourites I read. I think I was thirteen when I had a go at a novel (originally planned as the first volume of a trilogy!) that to some extent aped Arthur Machen, The Pit. I abandoned this after fifty pages or so and tried my hand at detective fiction in the manner of John Dickson Carr. Murder by Moonlight petered out after sixty pages or so, but soon I set about a second version, using the first one largely as an indication of what not to do. I believe I was still working on it when I came upon the first ever British paperback of Lovecraft’s tales, Cry Horror!, which gave me a sharper focus. I abandoned the detective book about one hundred and thirty pages in, and wrote my first Lovecraftian tales. I was then fourteen and soon, as I wrote them, fifteen. I finished the contents of The Inhabitant of the Lake as I was about to turn seventeen, and by coincidence tat was when I first read Lolita. Nabokov was as much a revelation as Lovecraft had been, and (along with Fritz Leiber’s brand of supernatural horror) sent me along the new route I was to follow.

I’ve never had much sense of trends or their causes, but as a general observation I believe horror will never die. However often it’s buried, it scrabbles back out of its grave. I think that last collapse may have been caused by too much of a boom and by too many books that were mediocre or worse. Just now the field is swarming with talent, and it would be a surprise (not to mention an injustice) if this hadn’t brought it back to commercial life.

I wasn’t planning to touch upon the pandemic – after all, how many novels from the 1920s mention Spanish flu? – until it occurred to me that it would be entirely relevant to the novel I’m planning to write this year, The Lonely Lands. At the same time, it does seem that folk welcome fiction that carries them beyond the present situation, and in my case the books I’ve brought out during the pandemic – The Wise Friend, for instance –  have been as well received as any I’ve written so far.

I often write children, not least as a reminder to me and the reader how it was to be one. Their vulnerability is a recurring theme of mine, but I think we get some sense of their resilience as well in this book. I’ve never found it hard to focus a sympathetic imagination on their experience – quite often I’ve written in the voice of one, partly in admiration of the naïve voice Machen employs in “The White People” to extraordinary effect. However, the reason for the choice in The Searching Dead was more to do with the form of the trilogy. I don’t believe in writing in any specific form unless there’s a reason for the story to take that particular shape, and when my old friend Pete Crowther did his best to persuade me to write a horror trilogy I demurred until I eventually came up with a theme that seemed to require three volumes – the continuing conflict between a protagonist helped by his friends against an increasingly vast supernatural threat throughout most of their lives. That needed them to be pretty young to start with, and so they are.

The school certainly resembles mine, but the book isn’t quite as directly autobiographical as some commentators have suggested – the staff, for instance, are almost wholly imagined out of the air or at least the interior of my head (if there’s much of a difference). The general sense of the place is authentic, though. I’ve written elsewhere about the extremes of such education back then, though Errol Undercliffe got there first with “The Interloper”.

Types – every kind. The last few I read include John Langan’s splendid The Fisherman, the Agatha Christie novel set on an island off Devon, Clay McLeaod Chapman’s disturbing novel Whisper Down the Lane, Jeff Young’s Ghost Town (a poetic reminiscence of Merseyside, which I recommend to anyone who likes my Liverpool tales), and Dino Buzzati’s Catastrophe.

Right now I’m rewriting the first draft of a new supernatural novel, Fellstones. Another novel, The Lonely Lands, awaits writing. PS Publishing will bring out a third volume of my collected shorter tales, Needing Ghosts and Other Novellas, including a new one, The Village Killings. They also have my second non-fiction collection – Ramsey Campbell, Certainly ­– in the works, and their Electric Dreamhouse imprint is preparing a collection of my columns from Video Watchdog. Another work I have in progress for that imprint is Six Stooges and Counting, a personal wander through the Stooges’ films.

For me it enriches the imagination, but then all good at does that, as well as making us – creator and audience alike – look again at things we’ve taken for granted. I’d certainly hold horror to the literary standards that the best work has established throughout its existence. May it never lose its power to disquiet and to haunt us with the uncanny and the darkly psychological.

Needing Ghosts is one, because it felt more like dreaming onto the page than anything else I’ve written, and liberated my tendency to nightmare comedy, also at full strength in The Grin of the Dark.  Right now I’m quite fond of the trilogy – it does seem to achieve a decent amount of what I was aiming for, and it’s a good introduction to what I do.