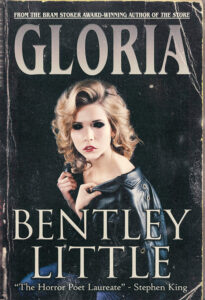 I am proud to say that I have been there from the beginning with Bentley Little—the man whom Stephen King was quoted as calling ‘the Horror Poet Laureate.’  Whether writing under his own name or a pseudonym, I have gone out my way to read everything he has penned and never been disappointed. That being said, I am pleased to say that GLORIA may very well be the most complex and satisfying novel Bentley Little has written to date.

Little wastes no time diving into the narrative of GLORIA as the opening lines depict Gloria Jaymes not expecting to ever see her mother again, especially at her own home in the moments following her funeral. Not only does she show up, but she appears to her the way she used to look back in the 1980s—big hair and everything! Gloria is able to converse with her mother, who recalls that she is supposed to be dead but has no explanation beyond that for why she is once again walking around her daughter’s home and even baby-sitting her grandchildren. The stranger thing is that no one else outside of Gloria finds this odd or even questions it.

When Gloria’s husband Benjamin dies in a plane crash during a business trip he does not return from the dead. Gloria is really confused now about everything that is going on in her life and wondering if it is all just a living nightmare. At one point, at the end of the first part of GLORIA, she is impelled to visit a small shed in a town called Hicksville, California. She meets a man standing outside the shed who reminds her of the actor Sam Elliott, and he tells her: ‘We’ve been waiting for you.’

If that is not confusing enough, wait until you begin Part Two of GLORIA. As I began the second section of the novel, it was like the first part never occurred and I began to wonder if I (or the author) was losing my mind. Gloria was the only person who had any recollection of what had preceded this point, but everything else around her seemed to have changed—sort of like that episode of the Twilight Zone with the prisoner on death row who wakes up each night to have the same recurring dream where he is about to be sentenced to death, but every character has been moved around interchangeably except for him. If you are old enough to recall that episode, then you have some idea of the magic Bentley Little has created with GLORIA as each part of this terrific novel does exactly that. The trick for the reader is to try to figure out who and what exactly Gloria is and why is there a group of people worshipping her from a shed in Hicksville, California?

At one point in the novel, Gloria thinks to herself that she had no idea that everything was going to be so complicated. I laughed out loud and wanted to yell back at the book—just try being a reader! Similar to stories where characters get caught in a loop and get to relive parts of their life over again—think “Groundhog Day”—Gloria does learn something from each incarnation or Part of this novel and that allows her to grow smarter and gain the ability to manipulate things slightly in an effort to try and get the answers she and the readers both desperately need and want from this enlightening tale.

GLORIA is a glorious puzzle-box of a novel. A horror novel through and through, but at a much higher level than your average story in this genre and the best thing Mr. Little has ever written. So satisfying and enjoyable it made me want to start it all over again once the final page was turned. The ending was a thing of near perfection that will bring chills, tears, and pangs of jealously from other writers who wish they had thought of the idea first!