In the Valley of the Sun – Book Review 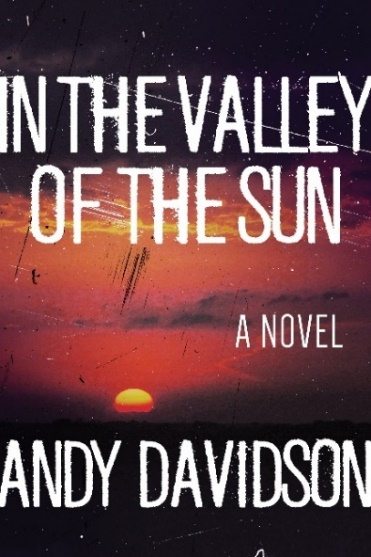 In the Valley of the Sun
Andy Davidson
Skyhorse Publishing, Inc.
June 2017
Reviewed by William Grabowski

Spring 2017 has delivered a veritable bounty of books, all (with one exception) written by authors unknown to me. Better still: these are works of some originality, wherein common tropes and stale storytelling are doused with gasoline like cruddy engine parts, scrubbed, and assembled into forms barely recognizable—and dangerous.

You might recall the late William Hjortsberg’s brilliant novel Falling Angel (1978), and the equally (if “transformed”) brilliant film adaptation Angel Heart (1987). Through In the Valley of the Sun‘s first 50 pages, I experienced that wholly subjective thrill of climbing into a place, my actual surroundings dissolving into irreality. Davidson had seduced me into caring very much for the tormented Travis Stillwell, a man whose suffering (and ability to inflict same) reaches Biblical profundity.

Imagine, if you will, The Silence of the Lambs‘ Jame Gumb committing atrocities, but possessing empathy. Likewise Travis, whose upbringing and trauma render his catastrophic crimes somehow even more devastating. How could he have known one of his victims would turn out to be someone even worse than he, damned beyond any chance for redemption? As my old pal Joe Lansdale once remarked: “This one’ll knock your dick in the dirt.”

Set in the American Southwest, primarily Texas circa 1980, the narrative spaces are wide, thinly populated, and lonely in a way hard to imagine compared to current 24/7 hurry-up-already standards. Based on this alone, anyone younger than 30 will be faced with dreaded silence, sitting still in darkness, and other real thrills. What separates good storytelling from great? Good storytelling hooks your attention, and takes you on a reasonably predictable ride whose hazards—even in the dark—are familiar. At the end, you’ve had a few hours (or days) of entertainment and jolts. Great storytelling requires no hook, immerses you in nuanced, unobtrusive prose. You want only to know these people more, and find out What Happens Next. Plot becomes incidental.

Travis, crossing the vast dusty emptiness between Texas honky-tonks, motels, and chaotic memories in his cabover camper, takes refuge in the parking lot of single mother Annabelle Gaskin’s motel/café—a remote business barely functional but popular with locals. Annabelle is no stranger to turmoil, hard work, and solitariness. At first cautious around the scarred cowboy seemingly residing on her property, Annabelle offers him work cleaning junk out of the neglected pool and performing various repairs on the motel. Her pre-teen son, Sandy, is curious, and slowly invests trust in the resourceful but too-quiet Travis. Annabelle observes that Travis (rightly) goes out some nights. After a while he appears to suffer from a major irritation—disease?—of the skin, and must work at night. Travis often makes disturbing remarks, but it’s hard to tell where they’re directed due to his essential hauntedness and practicality.

Across the state, Texas Ranger Reader is hunting for a killer of young women—a man with a signature “style.” If Davidson was going to turn predictable, here was his chance. But Reader is an actual person whose job pushes him into horrors no one should see, and the author’s frank descriptions of Reader’s methods and feelings elevate the novel into literary naturalism. We’re forced to endure the unfiltered ugliness of murder, its everydayness and emotional devastation. Eventually, of course, he locks onto Travis Stillwell.

Davidson’s unrelenting realism renders the supernatural—when it strikes—completely shocking, nearly inevitable. I’m certainly not alone in hoping he can sustain this level of craft and artistry in future work.