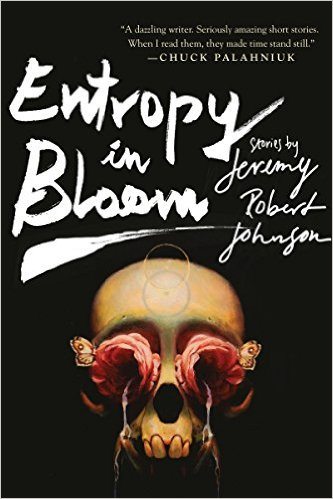 It’s tempting and easy to compare writers, but this habit often is unfair to both object and subject. Example: thematically, and stylistically, the work of Jeremy Robert Johnson can be compared to that of John Shirley, Chuck Palahniuk (who lauds Johnson as “A dazzling writer.”), or even Harlan Ellison. Since no writer emerges from the muck fully formed, comparisons are useful in the same way that someone might say, “If you like coconut milk and Thai peanut sauce, then you’ll probably like baked peanut chicken.”

Johnson rightly calls Entropy in Bloom a “4K Criterion Collector’s Edition Blu-Ray of my short work,” culled from We Live Inside You and Angel Dust Apocalypse, plus a never-before-published 25,000-word novella, The Sleep of Judges. Brian Evenson contributes a reflective intro.

For my money, the most fascinating tale is “Trigger Variation,” wherein the author explores the painful reality endured by a group of newly straight-edge guys who trade drug abuse for weight-lifting and physical assault—a real-world problem rarely confronted in storytelling. A “clean” body doesn’t guarantee exorcism of emotional traumas responsible in the first place for addiction, and our image-is-all culture ignores this. Johnson’s truly shocking ending, in retrospect, becomes inevitable.

“Dissociative Skills” shuts us into the bedroom of a young man bereft even of loneliness. Desolated by parental neglect and boredom, prone to subjecting his body to bizarre intrusions (“Pre-emptive suffering makes me stronger.”), he opens much more than his drug-saturated mind.

Johnson’s virtuosity displays itself in “Snowfall,” as quiet and haunted as some Victorian ghost story—but profoundly dislocated. It shouldn’t work, but Johnson’s core empathy and willingness to confront humankind’s infinite capacity for destruction, makes it so: “He couldn’t believe his eyes. Someone had painted his whole house the darkest black he’d ever seen. On top of that, they’d painted people, beautiful, bright white people, on the front of his house. There were two people running, maybe playing, and standing close to the door, near the front windows, the silhouettes of his parents stood with arms outstretched to the sky.”

“The Sleep of Judges” closes the collection, and throbs with paranoia. A suburban father’s devotion to protecting his family from what apparently is a strange drug-pushing gang becomes a chronicle of isolation, and how the ever-increasing obsession (fed by shameless media and corporate agendum) with security is eroding trust and common sense. A trickle of cosmic horror ripples the borders of the narrative, and we’re never certain whether the events (first at night, then invading undeniable day) are imagined. A sense of futility and constant surveillance colors every scene, and Johnson’s ability to sustain till the end this level of tension is astonishing.

The ecologically-driven protagonist of “Cathedral Mother” determines to save towering Oregon redwoods from commercial destruction. On a night-climb (crafted with patient, thrilling texture), her emotions surge: “Just before breaking into the crown she spotted an inverted blackened chamber about three-feet wide, the damage from some fire that likely burned before the birth of Christ. Tucked just inside the fire cave she found a blind salamander, its damp wet shine speckled with orange dots. She grabbed a chunk of moist canopy soil to include in its container so that it might survive the voyage. The salamander wiggled in her fingers. She stared at it, wondering how the hell it got up here… This was a world so few had ever seen. And she was going to save it from her terrible species.”

What happens next lends the phrase “at one with nature” a terrible irony, and begs the question of whether there might be profound intentionality behind non-human processes whose interpretation requires no so-called mystical, or metaphysical, speculation.

Entropy in Bloom shows Johnson is capable of blurring genre boundaries with regard only for mining and expressing their mythic power—whose impersonal archetypes guide us—beneath.