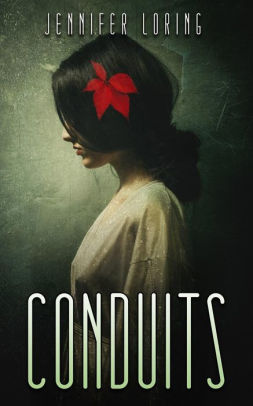 The term “conduit” has been used throughout horror/supernatural literature and films. Most recently, the films based on the possessed doll that was correctly identified as a mere “conduit” that allows for other beings (mostly evil or demonic) to use her to enter our world and do their evil best.

In Jennifer Loring’s thought-provoking novella entitled CONDUITS, the conduit refers to the central character, Mara. Mara has suffered severe personal loss and this has opened her mind to different spirits, many of who reside in a haunted house somewhere deep in the woods that appears to her in dreams. At one point Mara thinks about the quote from Lord Byron: Sleep has its own world. This is very telling for the rest of the story as there are points where reality and unreality cross each other to create a surreal world of Mara’s own making.

The most recent death of her boyfriend Jason is what really sets things off. We get to experience an almost soundless world within Mara’s mind where the souls of the dead dwell. Entries in Mara’s journal include her questioning theories of paranormal activity such as where electrical energy goes when we die. Mara’s mind becomes a literal portal where her dreams, as well as the points when she is unconscious in a hospital bed, become the narrative voice that moves the story forward.

She dwells on another important quote, this one from H.P. Lovecraft: We live on a placid island of ignorance in the midst of black seas of infinity, and it was not meant that we should voyage far. You could say that this pretty much sums up the questions that are possessing poor Mara. CONDUITS is a spiritual ride worth taking, and I would be very interested to see what Jennifer Loring can do with a long-form novel.