Book Review: THIS THING BETWEEN US 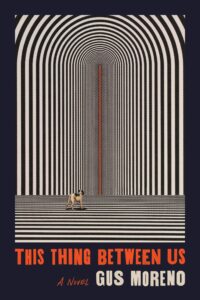 I admit to not being familiar with the work of author Gus Moreno, and was eager to read his highly acclaimed full-length debut novel entitled THIS THING BETWEEN US. My expectations were exceeded with this terrific literary horror novel that features one of the best and deepest explorations on grief that I have ever read.

The novel opens with Thiago at the funeral for his wife Vera. The young couple was unique protagonists for your usual horror novel, as they were Mexican-American. It was this dynamic that put an additional spin on the narrative, as cultural biases and norms played a key role in the characters that Thiago would interact with throughout the story. Thiago did not have a lot of say in Vera’s burial as he bent to the decisions made by her family, mostly her mother.

THIS THING BETWEEN US sees several jumps during the narrative from the present to incidents that occurred between Thiago and Vera. One significant bit involved an electronic personal home device (think Alexa or Siri) called Itza, which began to act up in their new apartment. Scratching walls, eerie music playing in the middle of the night, and packages they had not ordered were the start of the issues they attributed to the Itza. After Vera’s passing, Thiago is not free of strange occurrences in his life—even when he leaves the area—and he can link this back to the onset of the Itza situation.

Even when Thiago makes the difficult decision to leave everyone and everything he knows behind in Chicago and start life over on his own in the woods of Colorado, Itza still has warnings for him prior to his unplugging her for the move by way of odd quotes like: “You can’t handle the truth.”  The home he selected in Colorado is remote and far away from any neighbor. He takes on a stray dog who becomes his sole companion. As they explore the woods behind the house, they find a large wall in the middle of the forest almost like the monolith from 2001: A SPACE ODYSSEY.

After experiencing the wall, Thiago becomes consumed with it even finding no peace in his dreams. He drives his truck into the wall to no avail. Then, during another visit to the woods, the wall is gone but now replaced by a staircase. This staircase somehow leads to the subway station where Vera was killed by an accidental collision with a young man that knocks her down the concrete staircase. The strange occurrences do not end for Thiago as he picks out a book that had been left on the shelf in the home he moved into to find that several of the pages merely listed over and over again the statement: Pull me out of the wall.

THIS THING BETWEEN US will quickly turn surreal involving horrific deaths and scenes that make no sense in the real world. Since Thiago can no longer separate reality from fiction and believing that Vera is trying to get through to him this entire time, makes him become an unsure narrator, at best, yet you cannot look away. He still avers that what lives inside the Itza killed his wife and was still after his own sanity. The downward spiral Thiago takes makes for some terrific horror fiction and Gus Moreno is a wordsmith well watching out for.