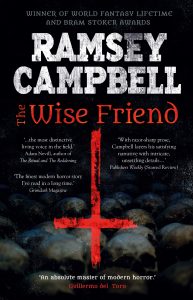 For me, opening up a new Ramsey Campbell novel is almost a religious experience. The man is a Master of Horror, with accolades ranging from the World Fantasy Lifetime Achievement Award to the highly regarded Bram Stoker Award®. He has been writing for seven decades, and I have been a loyal reader for the past five of those decades. The best part about reading a new release from him is the moment when you realize he has not lost a step and you are in for another frightening and unforgettable ride.

THE WISE FRIEND is Campbell’s latest release, and it is fully steeped in ancient witchcraft and gothic horror. The most frightening thing is when the ancient world collides with the modern one, and the characters involved must accept how ill-equipped they are to deal with the very real horrors they are caught in the middle of. Our protagonist is a man named Patrick who is dealing with the recent passing of his Aunt Thelma. As he is going through her things in her flat, he comes across not only the artwork which made her somewhat famous but, more importantly, a journal that dictates the things she was involved in, which not only drove her creativity but also spurred her into pursuing things that were beyond the scope of our regular day-to-day life.

Patrick had lived for a while with Aunt Thelma, and always admired her. He is presently separated from his wife, Julia, and they share custody of his son, Roy. Patrick makes it a point to share as much of Aunt Thelma’s work and life with Roy as he can. It is when he takes Roy to a local gallery that is displaying Thelma’s work that they meet an energetic and mesmerizing young lass named Bella. Bella is also very much interested in Thelma’s work and seems to know so much about not only her creative output, but also the items from the journal which indicate the things that inspired and drove Thelma’s creativity.

Bella takes an instant liking to Roy, and Patrick notices the marked change in his usually shy and introverted teenaged son whenever he is around her. However, what begins as a relationship founded on mutual interests sharply turns into something much darker. The trouble is that Patrick is the only one who sees this, who recognizes that Bella is not who she claims to be and that her appearance as a ‘wise friend’ to him and Roy was just a scheme to get closer to them and finish a ritual that Thelma died trying to complete.

The cover of THE WISE FRIEND is haunting with a depiction of an upside down crucifix. Patrick pieces together from his research into occult practices that the term for this is the Latin phrase: Crux Inverso, or Upturned Cross. This discovery unsettles Patrick, as it most certainly will the reader as well. From that point of the novel, which is about midway, we come to the conclusion that Patrick is now on his own separate mission, which may be the same one that the mystical and untrustworthy Bella and his son Roy are attempting to complete. Things get very tense and you will feel your heart in your throat as a common man like Patrick attempts to untangle the occult practices that his beloved aunt lived with every day. In typical Campbell fashion, that feeling of unease will drive you straight through to the ending. Knowing it is a Campbell book should also foretell that it may not necessarily result in a happy ending, but his characters usually get what they deserve. Cheers, Ramsey, and thanks for the continued thrills!