Book Review: TALES FROM THE HINTERLAND 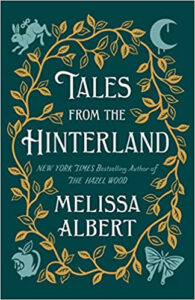 What author Melissa Albert has accomplished with her delightful collection of stories entitled TALES FROM THE HINTERLAND is something that I hope is one of the most talked about literary feats of 2021. She has gone back to the origin of storytelling, specifically those tales that would typically be passed down verbally from generation to generation. These are ‘fairy tales’ like those that the Brother Grimm made famous and would become the basis for modern-day horror and dark fantasy stories.

Hinterland is a dark and unfamiliar place, and the stories Albert has provided us here often have a slightly feminist bent as well as being a tad more violent than those we remember from the Grimm’s. She dedicates the collection to ‘all readers whose first language was fairy tales’. I will highlight a few of the stories found in this collection that particularly hit home with me:

“The Door That Wasn’t There” – young Anya remembers the day her mother shut herself away behind a closed door and was never seen again. All that was left behind was huge stain of blood. It seems that Anya’s mother used her blood to create a door for herself to another realm and it will take more blood to reopen that door to see what is on the other side.

“Jenny and the Night Women” – Jenny was the daughter of a couple who could not have children of their own. Some sort of magical apple that her mother ate grew in her stomach and swelled it with life which became Jenny. Jenny is different and has a dark side and grows weary of her parents. She hears tale of burying a bloody stone near their window to summon the Night Women who would help her exact revenge upon her parents.

“Alice Three-Times” – we all know the name Alice as being synonymous with fairy tales, but this is not a tale of Wonderland. This Alice was born with eyes that were completely black that those of a demon. Her mother the Queen does not trust her and orders the servants to never leave her other children alone with Alice. Alice is eventually exiled, but will that stop her from becoming what she was destined to be?

“The Mother and the Dagger” – in a small village that takes to hanging bones over their doors to warn them when ghosts are entering lived a small girl, a princess who has bewitched her father the King. The Queen consorts with a witch who asks her to take a dagger and cut out her own tongue, collecting it and all the blood in a small bowl. What happens next will show the evidence and unpredictability of witchcraft and to be careful what you wish for.

TALES FROM THE HINTERLAND is pure escapist, horrific fun. These tales are all like small nightmare visions you might have on a dark and stormy night and they harken back to another age when all we had were stories like us to make us respect and fear the world around us. I look forward to what Melissa Albert conjures for us next!