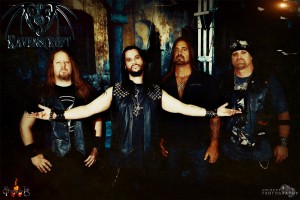 In 1994, British alternative band Bush said in their hit song Everything Zen, “There’s no sex in your violence.” While many feel this song was a satirical look at Western boredom and waste, music often gives us the wonderful opportunity to put individual lines in isolation and rework them into our own contexts. This particular phrasing is iconic in terms of modern pop culture (post-Beatles) because it is a blueprint for what to avoid in making good horror fiction as well as valid heavy music (the two being universally and historically intertwined since Rosemary’s Baby came out in 1968, two years before the debut album of Black Sabbath). While Bush’s dark, mysterious, and easily misunderstood aphorism surfaced an odd twenty four years after the two aforementioned industry archetypes established themselves as anchors on a shifting artistic landscape, the sentence’s power and meaning negate linear compartmentalization.

Plainly, the line from the Bush song is vile in its literal form, and quickly we make two assumptions. It is either a sarcastic accusation for one soulless and sexually deviant, or it is a metaphor for those artistically representing the macabre, a warning and guideline that would define horror and metal as avenues to build portraits of human darkness without cheap architecture that would present as gratuitous. Therefore, we might interpret this line less as “don’t have sex without violence,” and more as “don’t depict the shadows of the heart without poetry.” For if we do, there is nothing there but hyperbole: a fictitious villain stabbing a victim FIFTY TIMES, or a guitar player knocking down FIFTY ARPEGGIOS in an impossibly small window of time frame and measure. When we pass these things off as “dramatic” we don’t get art, we get the newspaper, the six o’clock news, the bully in the school yard who can “hit harder and faster than you,” and while we widen our eyes at all three, they often teach us little. Great horror fiction and influential hard music attract us not because of the body count, the zombies, the witches, the warlocks, the vampires, or concurrently, the flash bombs, spotlights, and smoke machines, but more because they show us truths, often dark, in a manner that ironically creates hope. The ending of the movie Seven (and this is a horror movie, make no mistake) is certainly not happy, in fact, it is a manifestation of the destruction of idealism. Still, after the credits roll we hug our loved ones and drive home to make dinner, our idealism and faith in ourselves strengthened somehow. We hold each other bit tighter that night and understand our own black caverns a bit more. Concurrently, when we listen to Bush or Iron Maiden or Black Sabbath or Five Finger Death Punch we connect with personal darkness on a poetic, fundamental level to get perspective.

It is not finally a matter of sex in the violence.

We crave symmetry in the presentation. It makes the man in the mirror multi-dimensional and therefore, more culturally empathetic.

In terms of hard music nowadays, the difficulty for the performer doesn’t so much lie in the platform. On holistic grounds, music has not changed much since The Who revolutionized the power trio with vocalist, and Led Zeppelin, Black Sabbath, and Van Halen hardened its metal edges. There also is not as much of a divide between generations anymore. Kids who grew up on seventies rock didn’t really understand the show tunes and swing music of their parents, while current technology and accessibility immediately familiarize kids nowadays with the rock of past decades, some of it poetic, some so jam packed with arpeggios they move over to EDM and Hip-Hop.

When I evaluate a horror scene the first thing I ask myself is whether the presentation was relevant, poetic, and beautiful. Hannibal Lecter’s escape in The Silence of the Lambs is not just “bloody.” It is clever, well foreshadowed, visually stunning, and extremely well written in the way the character makes use of the physical surroundings, his resources, and the timing. In parallel, new music by Ravenscroft, more specifically their video of the single Cauldron of Deceit, gives us a fresh taste of something both musically hard-edged and poetically dark. And the “make or break” question at this juncture in the episodic timeline of pop music is not so much whether or not there is “sex in their violence,” but rather, is there credibility in their performance. 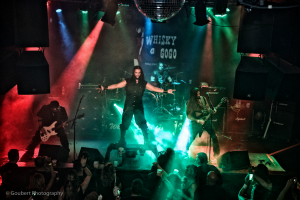 To be clear, this video is mesmerizing. The music is both hard and melodic, tight and engaging. The title has little to do in any literal way with the lyrical hooks, one being the plea, “Set me free,” and the other the heart-felt inquiry that is repeated hypnotically, “Can’t you hear my screams.” So much for titles. The beauty in this particular piece begins with the dichotomy Ravenscroft creates with these heart-wrenching lines, delivered with raw passion and at the same time such rich texture that one is reminded of the initial attraction of Deep Purple, with their fierce cutting edge that was simultaneous velvet.

Frankly, Cauldron is a beautiful song, a ballad that is going to stand the test of time, and Ravenscroft is a collection of authors if you will, writing poetry of hope, coming ironically, from the dark recesses of the human experience. It is no coincidence that singer Ralph Buso sings with such emotion being that he lost his father when he was just ten, and it is also not lost on us that he wandered Poe Park in South Bronx growing up, searching for answers. Of course, the park is named for Edgar Allan Poe, and it is therefore no surprise that Ravenscroft adorns their stage set up with small gargoyles and skulls between medieval candles on top of their Schecter amplifiers. They wear leather with some studwork reminiscent of Judas Priest, but it is not lost on the viewer that they also have eye makeup in dark circled edging, a seeming tribute to Alice Cooper and the horror wonderland of magic he brought to the stage in the seventies, shocking audiences and critics alike, while starting the first real “rock rumors” where puppy dogs were getting run over by lawn mowers.

Still, Ravenscroft does not base their appeal on spectacle. There is nothing gratuitous about their performance and nothing that indicates they are following “trends” in terms of their overall presentation. Musically, they are superior, and that puts them in a critical position. The problem with power trios with vocalists has always been cohesion, and while many of us will always been die-hard Who, Zep, and Van Halen fans, the one critique that always could be made was that they were all narcissistic superstars going off in different directions all at once. Ravenscroft is a team, and granted, a talented one. The aforementioned vocalist Ralph Buso is an absolute stud, unfolding one of the strongest vocal tracks in recent memory in terms of range, tone, and dynamics. Bassist Devin Baker is not simply playing roots, but his own intricate and inventive melody. Guitar player Brett Octane pulls sounds out of that flying V that tell stories, and drummer Pat Magrath makes the drum track interesting without blasting into those currently popular double bass machine-gun licks so rapid that they wind up sounding mechanized.

The difference is that Ravenscroft approaches this song like artists contributing to the canvas, not free agents showing off their mastery over scales and rudiments. The result is a song you cannot stop humming to yourself, thinking about, forming into a soundtrack that will rivet you to the moment in your life when you first heard it and where exactly you were in your journey. There is not much pre-planned choreography in this piece, for all but an anticipatory raising of the guitar-necks before the first chorus and this works quite well for the overall vision and its honesty. The guitar solo is melodic by choice, showing that the absence of acrobatics contributes to the broader statement, and the drum fills are tight, yet reserved. Still, the sacrifice for the overall statement of the composition might imply that there is a lack of dramatic tension and release, and this could not be further from the reality.

The song’s best moments come in the bridge following the second melodic lead guitar section. Here, Buso repeats “Can’t you hear my screams” six times, each richer and more heartfelt than the last not only as a result of his emotional interpretation, but the layers the band creates around this progression visually, having Baker sing along on the third round, Octane on the fourth, and Magrath doing a clever double trick twirling the sticks before the cut-off. All of this exemplifies perfectly executed visual and audible dynamics before Buso is left on his own to hold the song’s signature note, breaking your heart, making your day.

Ravenscroft is a band, a team, and a damned good one. There is expertise in their subtlety, poetry in their darkness. Most of all, however, they make Cauldron of Deceit play honestly, and we can’t ask for anything more from our artists who explore all sides of the human experience, be it in horror novels or heavy metal, monsters or Flying V’s.

In the end it’s all about integrity.

In the end it’s all about finding a band that can speak to you. This is one of them.