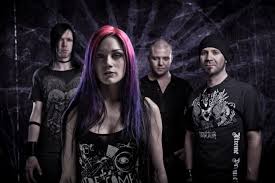 Women in horror and rock have historically forged paths that could be viewed as dissimilar, though one musician in particular has quite cleverly used parts and parcels of the former to make herself into a different kind of icon. However before unveiling the artist creating this unusual hybrid, it should be noted that in terms of fiction, there has been a masculine fascination with the “persecuted maiden” as far back as Andromeda being chained naked to a rock in the sea because her mother offended Poseidon. The Middle Ages brought us the trials and torments of The Clerk’s Griselda in Chaucer’s The Canterbury Tales, and the Gothic period paved the way for what we would consider the beginnings of the modern woman in horror, she who in the later part of the Victorian age remained intoxicatingly innocent, gloriously frightened, and sexually mesmerized by Bram Stoker’s Dracula.

The real question here is whether or not the idea of the victimized woman evolved or regressed with the emergence of the “Scream Queen” of the slasher genre, starting with Marion Crane played by Janet Leigh who had the unfortunate desire to take a shower in Alfred Hitchcock’s Psycho (1960), continued by her daughter Jamie Lee Curtis dropping the knife not once, but twice, in John Carpenter’s Halloween (1978), and brought full circle by Liv Tyler making us jump straight out of our chairs in the last moments of 2008’s The Strangers.

Yet this is not the real question either, though it is one of the foundational issues. The question in its raw (yet politically incorrect) form is whether or not women in horror are ever portrayed as strong and intelligent as opposed to “blonde” and half-naked. Then there is the more complex question of whether a blonde, half-naked victim can also be strong and intelligent, and I would argue that it all depends on the film. There are also examples of women in horror who portray vicious, ingenious antagonists, though we always conveniently forget to put them in the conversation for fear it might weaken the trendy argument against Hollywood’s capitalistic tendency to feed on masculine misogynistic fetishes. And in blaming the pimp, we inadvertently punish the John, admitting by default that since we can’t put these female villains in a category that would market their sexual appeal, they don’t stick in our collective and quite selective subconscious.

To be clear, the strongest females in horror are matriarchal figures. We cringed in 1976 when Margaret White, played by Piper Laurie, slammed shut the closet door on her daughter Carrie and quoted the bible in a voice of fire and brimstone. We were shocked in 1980 when Pamela Voorhees, played by Betsy Palmer, turned out to be the vengeful killer in Friday the 13th, and no one can sit comfortably watching the “mothering” (and maniacal) ex-nurse Annie Wilkes, played by Kathy Bates, raising her sledge hammer in the hobbling scene of 1990’s Misery.

Sure, all three are scary. But they ain’t sexy. Of course, there’s Julia Cotton, played by Clare Higgins, in 1987’s Hellraiser, tempting men back to her house so her dead ex-lover Frank can harvest their blood, but the gore in this overshadows anything that would pass for erotic. There’s The Craft (1996) and Ginger Snaps (2000), yet these witches and wolves are but teens, and we are well aware of the message we send to high school girls having sex in horror movies…just ask Linda Van Der Klok, played by P.J. Soles, as Michael Myers wraps a phone cord around her neck after she asks him if he sees anything he likes.

And so we come back to the question of whether feminine sexual appeal has to be linked to weakness and victimization in popular culture. Still, in a return to the idea of the “Scream Queen” as a concept, we have to recognize that this phenomenon is not visual, not in its literal sense. It is a reference to what we primarily hear, and that in itself opens up the door to a critical scrutiny of other avenues of art and entertainment developed in the same timeline.

As established in prior reviews, modern horror and modern rock have grown in parallel since the nearly simultaneous emergence of Rosemary’s Baby (1968) and Black Sabbath (1970), and while both share an amazing number of features, there seems to be a divorce when it comes to women and their given roles in both superstructures. Ann Wilson of Heart was openly lovely, and though she was led along by a “Magic Man” and manipulated, she was a woman who demanded that we understand, not one who begged for our forgiveness. Joan Jett showed off her rockin’ bod in Do You Wanna Touch Me and hated herself for loving us, but she wasn’t locking herself in her room with the shades down, crying into a Kleenex. She was getting her shit together, going down to the club, putting another dime in the jukebox, and asking us to dance. Blondie had the sass to parade around in those short skirts, telling us to call her, and Wendy O Williams came close to open pornography, backing up her right to express herself with her trusty chainsaw. 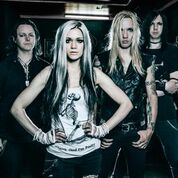 This is not to say that women in rock never offered us tragedy or despair based on temptation, weakness or fragility. In a sense, rock is impulse-religion based on sex and emotion, and just as we might have cheered Pat Benatar for telling us to put up our dukes, we have shared in the heartaches of Janis Joplin, the cycles of abuse indicated by Natalie Merchant, and the shattered and self-destructive real-life relationships described to us by Stevie Nicks. The main difference between these aforementioned musicians and their kissing cousins in slasher movies, is the idea of victimization and the way it is personified.

In terms of the former, we might ask if there is truth and paradox in the given vulnerability. As for the latter, the issue has more of a survival focus, and therefore raises questions of baseboard intelligence and bravery. And it is possible that finally, the best of either sphere might risk borrowing from the other.

A superb, current example of this complicated (and successful) mosaic is the single Scars by Forever Still, a relatively new band from Copenhagen, co-founded by singer Maja Shining and bassist/producer Mikkel Haastrup, and while the instrumentals (including Dennis Post on guitar) are sharp, hard-edged, brilliantly syncopated, and ultimately satisfying, it is highly relevant to mention that the young woman fronting this band is hauntingly beautiful. She also looks every bit the rocker, and while this certainly helps throw her into the arena of popular appeal, it could also quite dangerously cast her in the same light as those “Scream Queens” who tantalize us with little substance or staying power. The difference here is the way Maja Shining uses her visual appeal in connection with a stunning vocal, and a performance that creates a portrait of pain through which she daringly shows us the shadows of the female subconscious, linking elements of the horrific and the feministic “other” in a fresh sort of dark poetry.

The Scars video is addictive. The music is incredibly well written, performed, and produced, especially for a band that has their very first full-length album, Tied Down, dropping this coming January. Maja Shining sings about covering the scars of a relationship that damaged her, but the arresting issue is that she sings this from the inside-out if you will, showing us what is going on beneath the “bandages,” both psychologically and metaphorically. Plainly, this is an aesthetic vision of a woman coming undone, presented in a manner that is highly personal and daringly intimate, not as a result of the more common sexual triggers, but more because Shining allows us to see the naked mind.

She’s “searching, seizing, breathing, bleeding, screaming,” and in reference to the last word in the aforementioned lyric, it is not the wail of a “Scream Queen.” This is different, though it is also quite clear that Shining has borrowed visual techniques from the horror lexicon with clever subtlety. Whether performance-based or technically manufactured, the “scare moments” in Scars are effective, both in terms of song-relevance and posterity, falling on the side of the genre bringing us “Hospital Horror,” or more specifically, a feel more like Sybil (1976). She has dark circles etched under her eyes that look more emphatic than running mascara. She wears shredded gauze for gloves that could easily be dressings for suicidal wounds. In the video’s opening shots, she puts her hands to her head and shakes it so violently it seems frames have been removed (as is popular in modern horror to show startling movement) and at one point she drags her palm down the wall, leaving a stain that could be perspiration or blood, the washed out colors of the shot leave this unclear.

Still, the signature of this particular song, and the tie that ultimately binds Shining to women of horror in a legitimate yet unexpected way, is her use of the “Death Growl,” that which was introduced to us in its earlier form (at least commercially) through “Screamo” music that surfaced in the early 90’s. In Shining’s case however, she uses this rough, vibratory technique for effect, for the sake of dynamics, cleverly placed in two short bursts in the song’s first verses with the words “inside me” and “find me,” signifiers for the song’s metaphorical terrain through which we travel and the purpose of our journey. She then runs shivers down our spines at the song’s climax by admitting that she has become everything we wished she was not, the latter word “not” growled with such ferocity we almost want throw a long coat about her shoulders, hug her tightly, and provide her with shelter.

It is the Death Growl and the way Shining uses it that really exposes the part of the horror genre she has tapped into, the one that I would claim was ironically the inadvertent influence for Screamo, Nu-Metal, Industrial Metal, and the many other subgenres that have popped up all over the landscape. It is a direct allusion to the scariest horror film ever made and the female performance that defies age, sexuality, and gender. It is a salute to Mercedes McCambridge doing the voice of the demon Pazuzu, growling, “The sow is mine,” and a string of other harsh epithets in The Exorcist (1973).

What Shining does with her rendition of this beautiful, terrifying vocal, is use it to climax a tone of heart rending potency. What Shining has done with Scars is create a portrait of internal darkness that is attractive in its raw honesty and its ability to tap into our deepest sense of empathy.

She breaks our hearts.

And provides us a character we want desperately to save.