For the most wild, yet most homely narrative which I am about to pen, I neither expect nor solicit belief. Mad indeed would I be to expect it, in a case where my very senses reject their own evidence. Yet, mad am I not –and very surely do I not dream. But to-morrow I die, and to-day I would unburthen my soul. My immediate purpose is to place before the world, plainly, succinctly, and without comment, a series of mere household events. In their consequences, these events have terrified –have tortured –have destroyed me. Yet I will not attempt to expound them. To me, they have presented little but Horror –to many they will seem less terrible than baroques. Hereafter, perhaps, some intellect may be found which will reduce my phantasm to the common-place –some intellect more calm, more logical, and far less excitable than my own, which will perceive, in the circumstances I detail with awe, nothing more than an ordinary succession of very natural causes and effects. -poe 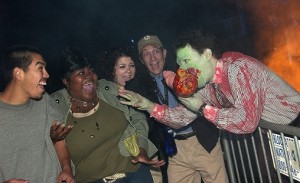 Edgar Allan Poe must be spinning in his sunken grave because he cannot attend the beautifully crafted Halloween Horror Nights at Universal Studios. I had the great opportunity to attend the press forum two weeks ago and see the Zombie Students as they began their ghouling class schedule. It was a blissful early morning as I drove up onto the back lot and got lost. After wandering up to the Bates Motel, I was greeted by a horde of news crews and Zombie applicants. Together we walked through the amazing plane wreckage from War of the Worlds and took an assortment of photos.

Less than two weeks later, I was invited back for the VIP Zombie Graduation Gala. Friday the 13th of October. This date being the opening night of Horror nights and the unlucky Friday the 13th…it had to rain. The ceremony was amazing and the open bar was, well, from a writer’s standpoint it was like heaven. And it was free. The rest of the night was reminiscent of a Takashi Miike film laced with a bit of Hunter S. Thompson. From the ceremony, I staggered into bat country…

It felt like I was roaming around in a London fog as menacing characters hid in the shadows and moved in for their scares while wielding hatchets and chainsaws. Our first stop was the Asylum. This was an eerily decorated maze that had scares and gore in every corner. It reminded me of the house that Dr. Giggles had and the patients ran amok. 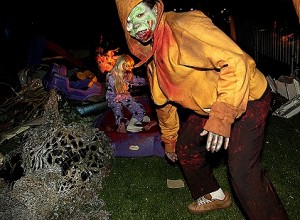 From there I was fortunate to skip the two hour wait for Jurassic Park in the Dark. The ride is a thrill during the day and at night it turns into a terrifying water romp. The shrieking dinosaurs in the dark seemed to get under everyone’s skin. My last stop of the evening was the ride up to the Bates Motel. Our host entertained us all of the way up with rated “R” banter. It was an enjoyable diversion from the typically family friendly vernacular that Universal staff usually applies during the day. The tram stopped and they kicked us out to walk along the path of the plane wreckage and Zombies lurked, jeered and scared the shit out of us. We boarded the tram again and were entertained by a short video that Universal put together that surmises how Halloween Horror Nights came about. (see official story below.)

Pavel Pranevsky got his start as a filmmaker back in his native Slovakia. And from the very beginning, Pavel was obsessed with making films that felt “real” — films that would “unnerve and horrify the viewer.” This reality proved too much for some and ultimately got Pavel blacklisted from the Slovakian film community in 2002. It was then that Pavel fled to Hollywood in search of real artistic freedom.

After a few years of making self-financed “reality” films, Pavel was recently hired by Universal Studios Hollywood to make the “ultimate horror film.” In fact, the Studio was so excited about the script that they immediately gave Pavel complete creative freedom on the set. Filming began in 06-06-06 and only when the Studio screened the dailies did it become apparent what a horrible mistake they had made. Outraged by the content of his film, Universal Studios Hollywood fired Pavel, shelved his film, and demanded he leave the Universal Studios lot immediately. 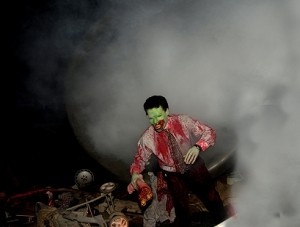 Retreating to the abandoned facades and thick wilderness of the Universal Studios Hollywood backlot, Pavel has sworn that “nothing and no-one will stop me from completing my masterpiece.” Hiding in the dense brush of the hills during the day has helped Pavel elude the Studio’s security over the last few months. And it is during the night that his filming begins. Universal Studio Hollywood’s working attractions have become his sets. Unwilling tourists have become his actors – often cast after being spotted from the shadows and bushes from which he watches them. It is during these “casting sessions” that Pavel has been videotaped by other tourists making their vacation movies — many of which have ended up on various sites on the Internet. And it is from these witnesses that many have confirmed that the legend behind the Director’s infamous phrase is true: “Will you make the Cut?” are the wicked words of encouragement he offers his actors right before the camera rolls.

Unable to capture and remove Pavel Pranevsky, Universal Studios Hollywood has decided to provide full disclosure regarding the Director being loose in the backlot. Consequently, Universal Studios Hollywood is dedicating a specific portion of the HHN website to keep the public informed about the Director – including posting the Director’s video diaries and tourists’ home movie sightings of the Director. And rather than cancel Halloween Horror Nights, it was decided that an official warning would be released to the public. Contained within the warnings is the fact that Pavel Pranevsky has vowed to complete the filming of his masterpiece during this year’s Halloween Horror Nights and that anyone attending the event could end up starring in his movie – prompting the question: “At this year’s Halloween Horror Nights, will you make the cut?”

Talented screamers have the opportunity to exercise their lungs in an effort to win the honor of “best scream” and an Apple IPod Shuffle…and perhaps the attention of a Hollywood casting director or two! In honor of Halloween, take a listen…..and help make the final ‘cut.’ 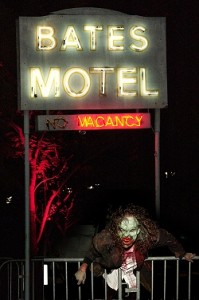 As a horror and Halloween fanatic, I must say that this is quite an accomplishment for Universal. The attraction runs through Halloween. Please visit www.halloweenhorrornights.com for further information. I know that the Orlando, Florida park has many other features that Universal, Hollywood doesn’t have during this event. I’d like to extend a special thanks to Lindsey Mesenbourg and Meghan Gamber for their help and support.