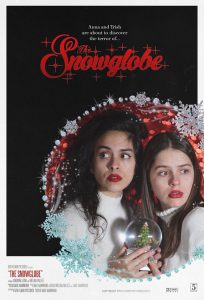 We’ve all been there before, right? Chilling out in a car with our bestie when, from across the gas station lot, we spot creepy Santa staring back at us. Such is the case with Anna (Isadora Leiva) and her best bud, Trish (Melina Valdez). The incident disturbs Anna enough to invite Trish for a sleepover, to have company for the night. With effectively somber lighting and a sad score, Anna explains how an heirloom—a snowglobe—had passed through generations of dead mothers until it got to Anna, right before her own mother died. Anna claims the snowglobe holds the power to foretell tragedy yet to happen and has, in fact, done so recently.

Utilizing a clever radio broadcast, we learn that Anna’s ghost story may be far more real and terrifying than anyone imagined. Between the glowing, vibrating snowglobe and the nagging paranoia Trish gets after she ducks out for an appointment, we get the sense something very bad is going to happen. Flashing back and forth between Anna, Trish, and scary Santa from the lot, an intense EDM soundtrack supports a truly intense sequence as all hell breaks loose when the three characters converge in a bloody finale, strongly suggesting not everyone will be home in time for Christmas.

We’re treated to an unexpected WTF moment during the end credits, fit to fulfil any craving of cheese you may have, to cap off a surprisingly well-produced short project with solid acting to boot. Go ahead and put some fear in your cheer this holiday season and give THE SNOWGLOBE a shake of your time. But be warned: you probably won’t be leaving any cookies out for Santa this year, naughty list be damned.

The Snowglobe – Official Trailer from Jake Hammond on Vimeo.