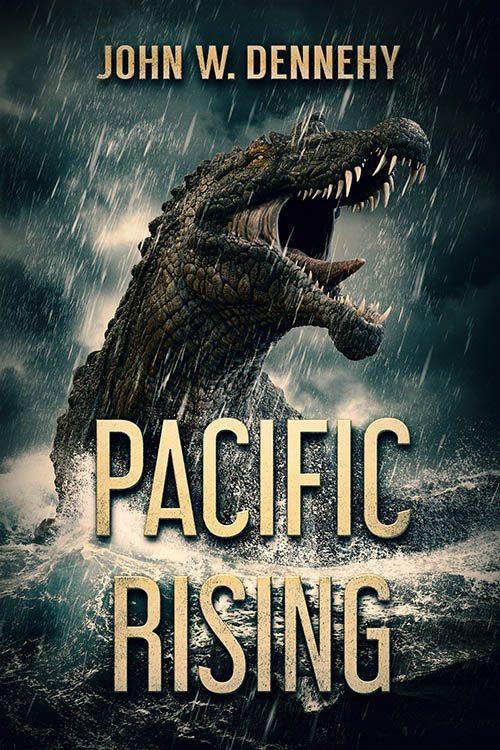 For those not in the know, Kaiju is Japanese for “Strange Beast” and usually refers to a giant monster in stories and film. Kaiju is also a film genre that features, you guess it, giant monsters. It is basically Japanese in origin and the most well-known kaiju is, of course, Godzilla. What I did not know is that there can also be Kaiju novels and they don’t necessary have to be written by the Japanese. Pacific Rising is one of those novels and I suspect it is one that is very basic to the genre.

The fact that it happens in Tokyo should be a giveaway to the formula and bases the plot on solid ground, so to speak. The monster that is set on destroying Tokyo does owe a lot to The King of Monsters but is given the name Zamera. The novel starts with the advancement of Zamera into Tokyo and the attempt to escape the chaos by a young girl named Maki and her parents. Meanwhile in Okinawa, Master Gunnery Sergeant James Penton is preparing the military base for an enormous storm when he gets a call about a major top secret assignment. This assignment will take him straight to the Kaiju in what appears to be a hopeless mission to destroy the seemingly invulnerable creature. There is a third narrative about two Navy Seals who are focused on stealing a nuclear device from the North Koreans. All three narrations come together at the end and we discover whether or not Tokyo can be saved and the monster defeated.

It all sounds exciting and it is. The novel is part monster tale and part military action adventure. John W. Dennehy’s strong point is his knowledge of the military. He puts it to work quite well in this book. The plot gets rolling from the first page and there is very little letup in the action. There are some sparks between Penton and Kate Able, a Marine Harrier pilot, but it is all by the military book and plays second fiddle to the destruction and chaos to come. A Kaiju novel is what it is and a Kaiju novel is what you get. Truth in advertising.

Yet I must ask, is that all a reader wants? If it is, then Pacific Rising will pay off. But the action seems rather predictable to any who is familiar with the genre. None of the characters really comes to life and there really isn’t much characterization you can do with a huge Japanese monster except to make him scary. The writing is to the point and not much else. It gets the job done but it doesn’t really leave much to remember it by past the final page. It feels more like a novelization than an original novel. I kept wondering if I saw the movie.

But as one might say, it is what it is and as a novel about a dinosaur like creature rampaging through a city, frightening little girls, and laughing at puny fighter jets, it fits the bill. It is action-packed and has lots of moments that will thrill those who like their heroes’ valiant and their monsters big. This is also a novel that will appeal to those who can’t get enough military adventures. As for me, yes, I enjoyed it. But overall, I would have rather waited for the movie.