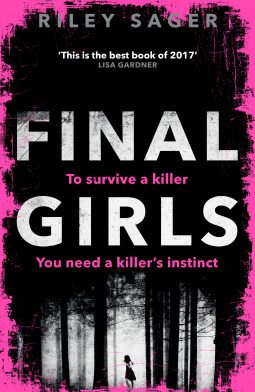 The term “Final Girl” is a movie term referring to the final woman to confront the killer and survive in a slasher/horror movie. It is a well-known cliché that is prevalent in slasher films like Halloween, Friday the 13th and countless others, but in real life it is virtually a non-existent event. Certainly it is common to anyone who has ever seen a slasher film. In the book of the same name by Riley Sager we are invited to contemplate the existence of three final girls and how the events afterward will affect them.

In Final Girls, Quincey Carpenter went to a cabin five years ago with five friends. She becomes the only survivor of a gruesome bloodbath. Before Quincey went through her nightmare, there were previously two similar but different incidents where two other women, Lisa and Samantha, survived a psychotic killer to be the only survivor. The media dubs all three “Final Girls” and, although they never met in person, there is a sense of unity and support between them as members of a club no one wants to be in. Quincy appears to be surviving well with help from her boyfriend and Coop, the police officer who saved her that night and became a sort of guardian for her. However her safety net starts to unravel when Lisa is reported to have committed suicide and Sam shows up on Quincey’s doorstep unannounced and for reasons not clearly apparent.

This sets up what is so far the best thriller to see light in the year of 2016. It is beautifully paced, constantly riveting, and pulls the reader into a tangled relationship that is not clearly revealed until the final chapter. Quincey is both strong in her willingness to survive but also fragile. She does not remember entirely what happened that night and has avoided confronting it, preferring to hide herself in her baking blog and letting her boyfriend and her guardian cop protect her. When Sam arrives it is both welcomed and questioned. Both of them are tough but not totally stable and the reason why Sam has chosen this particular time is constantly on Quincey’s mind. Yet they seem to connect because they went through a similar hell. Sam does indeed have an agenda but what it is will become slowly apparent as various twists and turns occur. Sam seems to be eager to get Quincey to remember the event of five years ago while Quincey feels safe and guarded in her loss of memory. The game between Quincey and Sam deepens while the reader is given flashbacks to Quincey’s horrific night five years ago. These flashbacks gives us more clue to the connection between past, present and the final girls.

I cannot overemphasize how deeply this tale of suspense grabbed me. Quincey is a beautifully complex character with levels of conflicts that one would see in anyone who went through such a nightmare. Sam is more of a mystery but she still rings true as one whose past is overwhelming her. The questions forming the mystery are several. What really happened in the death of Lisa? What really happened five years ago at Pine Cottage where Quincy became the only survivor? And what is Sam’s real reason for showing up in Quincey’s life? The answers to these and other questions will probably not be the ones you expect but that is the wonder of a suspense mystery like this.

Final Girls is probably destined to be compared to Gone Girl and The Girl on the Train, but that may be unfair. I became fascinated by both Quincey and Sam in a way I did not in the other two best sellers. The twists and turns of Final Girls came on swift and natural but surprising. It is a clockwork of suspense hitting all the right alarms in your head. I feel comfortable in saying that we are looking as not only the big summer hit but one of the best, if not the best, thriller for 2017.