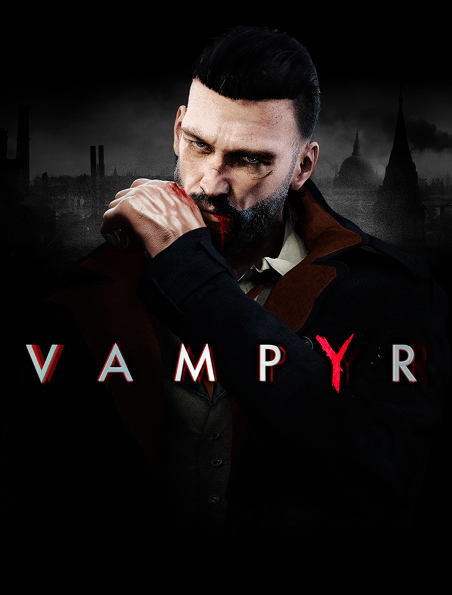 A new video game about vampires done by the developers of the highly regarded (and for good reason) indie darling: Life is Strange? Yes please. Vampyr is a much more ambitious game in scope if not story. Set in London during the tail end of World War I, right when the Spanish Influenza epidemic is ravaging the city, here you get an open world sandbox of a city to explore. And without the aid of automobiles or a fast travel system, you will get to know London very well. At least the few different sections you play in, such as the docs, a hospital, a graveyard, infamous Whitechapel, and more. Yes, the world is not huge, but it is easily large enough for this game. Any bigger and it would run the risk of repetition.

As for the story, you play as Dr. Reid, recently returned from the war and expert in phlebotomy and all forms of blood medicine. That’s a hell of a coincidence since you are quickly bitten and turned into a vampire. Sorry, a vampyr, I guess. So now you are a blood drinker and life taker, but you’re also a doctor so you have pledged to save lives. There’s also the mystery to what happened to you, why you were turned into a vampire and not outright killed, and what does this plague of the undead have to do with the Spanish Flu? Because plague it is, there are many, many vampires running around at night, and many different kinds of bloodsuckers too. There are the savage, nearly mindless Skals, the even more animal-like beasts, and then there are what you are, an Ekon, the rarest of all. Think of the traditional Dracula-like vampires, the ruling elite.

Into the benighted world of mystery and intrigue you are plunged and you must decide how you will play the game. Will you struggle to maintain your humanity or will you give in to the monster that you are now? To make the decisions harder, while you get experience for completing the usual RPG-like quests, such XP is very minimal, and you’re going to need a lot of experience to level up to face the bigger and badder enemies you will encounter as you progress. Now the best source of XP is the blood of others, but if you kill someone it will have real and measurable effects in the game world. Neighborhoods will weaken and suffer as people start disappearing down your gullet. Eat too many folks and things plunge into absolute chaos with a lot more and higher-level enemies clogging the streets. To further muddy the waters, to get the most blood XP from a would-be snack, you need to talk to people and get to know them. For some reason this increases their blood potency, but it also (hopefully) makes you see such characters as more than just blood bags on legs. So yeah, moral dilemma time. Do you kill everyone you meet? No one? Just some, and if so, who? Some are scummy and richly deserve it, but some are innocent and pillars of their community. Can you tell which is which?

The story and characters are easily and by far the best thing about this game, which again, should come as no surprise considering that the developer’s last game was Life is Strange. That said, the graphics are passable but only just. The setting looks appropriately dark, dank, dirty, and deadly, but some of the character animations leave something to be desired. They’re not bad, per se, but definitely not cutting edge or a great example of what can be done in games this generation. But the worst thing is the combat, and since there is a lot of baddies for you the battle, that’s really not good. For sure, the combat isn’t broken, but it’s serviceable at best. It’s a bit janky, clunky, and relies on button mashing a bit too much, and again, because combat is such a large part of the game, I really wished it was much better.

Vampyr is a fun and engaging game with great characters and a solid story. Sure it could have been better in the graphics and mechanics departments, but it could have been much, much worse. Horror fans, vampire fans, Victorian London fans, RPG fans, and fans of all of those especially, I highly recommend this game. If you play games for tight combat controls or cutting edge graphics, I would say still give this a look. There’s enough good here to overshadow the messy bits andI had a bunch of fun playing it. I think you will, too.