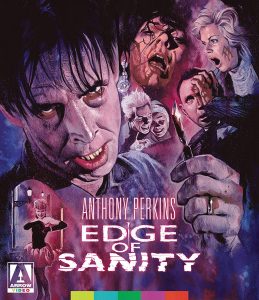 When you think psychos, you had better think of Anthony Perkins, or we can’t be friends. Not that he, the actor, was psychotic or anything, but after being Norman Bates in Alfred Hitchcock’s legendary Psycho, he would always be tied to the mentally ill and the murderous. Sure, he did more roles than just killers, but it is his killers that I am always drawn to. And the one he does here is a new spin of a very old classic, and yet it is one of his more overlooked madmen. Well, thankfully Arrow Video has changed that and has released a new Blu-ray of this often forgotten about 1989 film. So was it worth the wait, or was it just another film Mr. Perkins was typecast and forced to do to pay the bills towards the end of his career? Well, grab your cane, lots of cocaine, and keep an eye over your shoulder on those dark and foggy London streets, and let’s find out.

Here Anthony Perkins plays the classic Jekyll and Hyde roles, and if that wasn’t creepy enough, they toss in more than a touch of Jack the Ripper and a bit of misplaced sexual sadism. Yeah, this isn’t your dad’s Jekyll & Hyde story. This friendly Victorian doctor and humanitarian gets his murderous twin after his pet monkey spills some ether onto a big pile of cocaine (used only for “medical research,” I’m sure) by accident. The doc breathes in the fumes and suddenly goes as pale as a corpse, gets dark circles under his eyes, and stringy black hair over his face. Yeah, he’s basically a Victorian Goth. He also doesn’t have to limp anymore, and has a sudden taste for kinky sex and to slaughter some streetwalkers. The basics of the story pretty much follow that classic Robert Louis Stevenson tale, but what is added to the proceedings is what really makes this movie a must watch.

First, Mr. Perkins is good as the moral doctor, but he’s absolutely wonderful as the scene-chewing madman. He’s creepy and icky, spouts one-liners like he’s Freddy Krueger, just radiates sleaze and perversion, and it’s clear that the actor is having the time of his life. This is no subtle and restrained Norman Bates; Hyde is a full-blown, freak-flag-flying nut, and I love every minute he’s on screen. Then you add some stylistic choices, like when he’s Dr. Jekyll, everything looks and is shot like your typical Victorian England melodrama, but when Hyde comes out to play, suddenly everything is filled with lurid and garish colors, and there’s not a single scene shot without a whole slew of Dutch angles. The setting also begins to cross the line between what was 1880s London and the then modern day of the late 1980s. This is most easily recognizable in the fashion style of the prostitutes Hyde visits, with more than one looking like a stand in for a Madonna music video. Then you add the subject matter, the copious amount of nudity and sexuality, the gory and vicious murders, and everything feels gritty and dirty. This is no exploitation film, it’s not as overt as that, but it is far from your typical clean and safe Jekyll & Hyde movie.

Now let’s get to the extras and goodies that Arrow Video included with this new Blu-ray release. There is an audio commentary track with film fan David Flint and filmmaker Sean Hogan. There is an interview with director Gérard Kikoïne about his career, and another interview with the same man where he discusses Edge of Sanity. There is an interview with the movie’s producer, Edward Simons, and a featurette with Stephen Thrower, author of the book Nightmare USA, dissecting this movie. Dr. Clare Smith, author of Jack the Ripper in Film and Culture, talks about Edge of Sanity and how it compares to other Ripper movies. Lastly there is the good old theatrical trailer.

Edge of Sanity is a great, fun, and free-spirited take on the classic story of the good and evil inside all of us. It takes wild swings at the subjects and characters, and even the few times it strikes out, the gusto and audacity that it shows while just going for broke is impressive. Anthony Perkins is great in this as both the yin and the yang, and this film is like when arthouse meets grindhouse, and I could not be happier for that. For one of the bravest and funniest tellings of the Jekyll &Hyde story ever, this one gets an easy recommendation from me.