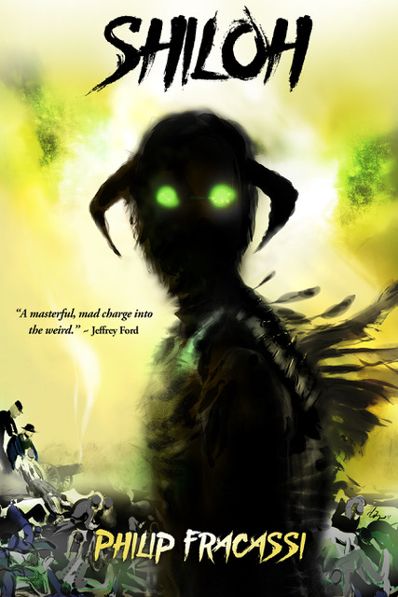 It wouldn’t be quite right to say that Philip Fracassi’s new novella SHILOH (Lovecraft eZine Press) is set against the backdrop of the American Civil War. Rather, it plunges the reader right into the thick of one of the bloodiest battles in American history and refuses to flinch. As protagonist Henry and his brother Will soon find, however, the horror of war is only the beginning and something far stranger is occurring. Vivid, visceral, and charging headlong into the no man’s land between historical horror and the Weird, Shiloh is an exciting and disturbing success.

Twin brothers Henry and Will are members of the Confederate Army, participating in the two-day Battle of Shiloh. As readers follow their initial charge and subsequent maneuvers, SHILOH gets quickly into the action with the body horror and existential dread of battle leaping from the page. All is not as it seems, though, as Henry has a vision of what he believes to be demons joining the fray and, when Will is wounded and then revived by a mysterious power, the brothers are forced to confront what they will do to survive. Ultimately, they face challenges worse than either devils or the Union Army. With its compelling mix of battle action, supernatural horror, and well-realized period characters on the ground level of history, SHILOH exists in the overlapping borders of historical military fiction, horror, and the Weird.

SHILOH blends genres to create something new, and author Philip Fracassi does an excellent job of marshaling historical fact and crackling prose to not just keep everything under control, but moving at a compulsively readable pace. The two-day battle and troop maneuvers provide a structure of skirmishes and retreats that frame the action, but it is impressive how Fracassi’s vivid prose draws on all the senses to present clear and compelling depictions of the chaos of battle and the unnatural calm afterwards. Always moving, the story slips with equal facility between gripping action scenes and the eerie wastelands on the periphery, escalating the physical and then supernatural stakes until it reaches a fitting climax.

Because Fracassi moves within the Weird, there is some level of ambiguity that readers of traditional military and horror fare might not be accustomed to. Henry, our first person narrator, is limited by his period and his experience, so the events as he interprets them are not necessarily as they are. There is some open-endedness, too, to the ending. While the events within the story are concrete and easy to follow, their meaning is open to interpretation. This kind of ambiguity makes for a rich metatext from which to ponder and tease out meanings, but it requires a bit of attention.

Philip Fracassi’s SHILOH is an exciting, terrifying blend of history, military, and horror fiction. Although the new ideas and vivid images on display here are compelling in and of themselves, it is Fracassi’s strong storytelling skills and the well-crafted narrative voice that make it so compelling. SHILOH is another exciting entry in Fracassi’s already impressive bibliography.