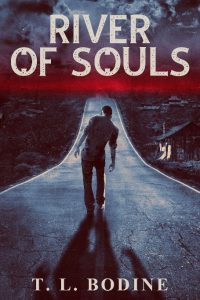 T.L. Bodine’s new novel River of Souls (Trepidatio, 2019) is a zombie story for our times. Eschewing the overtly cataclysmic or apocalyptic, Bodine grounds her Undead in a recognizable near-contemporary America where pharmaceutical companies have the same sway as mainstream society’s ingrained tendency to stigmatize Otherness. Her characters exist on the margins and struggle with confronting not only how the mainstream views of them, but how that impacts their view of themselves. For a book about zombies, it’s almost too real.

In River of Souls, being Undead is a condition akin to a chronic ailment – it impairs the zombie’s ability to function, but is manageable with a proper support system. Of course, also like a chronic illness, it draws societal pressures to it like no one’s business: it can require constant monitoring by family caregivers; the government demands registration; and there’s a noticeable social stigma attached to the sufferers, particularly those without the luxury of being able to pass for “normal” (like those, say, with faces hanging off). American capitalism has also stepped in with a pharmaceutical solution in the form of the Lazarus Drug – a treatment that manages the pain and brain-eating frenzy associated with Undeath … or at least so it claims.

Our narrator, Davin Montoya, starts River of Souls already on the margins. After his father’s death from the drink and benumbed resurrection, Davin left school and is working the night shift at a gas station in order to scrape together enough to keep his sixteen-year old sister Zoe out of DCS and provide care for his zombie father as best he can. Suffocating under the pressure and responsibilities, Davin wrestles with the opportunity presented when a “Lazarus House” managed care facility offers his father a spot.

Unfortunately, Davin’s new lease on life takes a tragic turn when an accident leaves him on the wrong side of the of death’s semipermeable membrane. Plucked from disaster by Randy, a smooth operator in a Mercedes, Davin must not only come to grips with his new life of Undeath, but with what that means. Hiding in plain sight, Davin begins to see how the world of unregistered Undead, internet conspiracy theories, and chemical dependency in the face of a Lazarus shortage all converge. If life was hard before, then Undeath is no respite.

What’s immediately refreshing about River of Souls is the way it removes zombies from the apocalyptic context, retaining the speculative elements while removing the now-standard-issue grime and gore typically associated with the genre. With the pressure of hyperbolized post-apocalyptic survival removed from the narrative, River of Souls can focus on characters closer to our contemporary world and the difficulties of more a more quotidian kind of survival. Doing so allows the zombies to dramatize more subtle problems — like the difficulty in taking care of an ailing parent, say, or managing a chronic illness with daily medication while navigating a health care bureaucracy. Moving from the personal, it also lets the zombies sand in for other marginalized groups – such as the working poor, immigrants (both those passing as citizens and those not), and queer people. Without the press of imminent destruction, the implications of Undeath can spread out and blossom.

It also allows Davin, the narrator of River of Souls, the space to breathe. Bodine has crafted a rich voice here, and it’s easy for readers to be drawn into his experience. As befits a focal character, Davin is gradually introduced not to a “new world,” but rather to aspects of the world which he’d previously been oblivious. With Randy – who arrives in a fancy car with a handful of Lazarus and a phone full of connections to serve as Davin’s ferryman of sorts – and sister Zoe – a new media-savvy teen with just a soupçon of the conspiracy theorist – Davin finds himself not only dealing with the practicalities of being newly Undead, but also being drawn deeper and deeper into the subculture. Charming, good-hearted, and conflicted – Davin is a wonderful creation bolstered by the rich supporting characters.

Davin’s story too is one of transformation. To say more would be to step on the story’s toes, but Davin’s arc is one recognizing possibilities and moving towards them. He never has the answers and although he is not always the catalyst, he is an active participant in his fate. His internal life is one of constant tension between resistance and surrender, where not every obstacle can be addressed the same way. It’s messy and complex without easy answers, but that’s what makes the journey — and Davin’s own arc — so satisfying to follow.

There are a lot of ideas going on in River of Souls and sometimes its banks come close to overflowing. The zombies, while rich in metaphorical potential, sometimes seem coded as stand-ins for multiple marginalized groups, and while this works because it keeps them from being a strict 1:1 read, it doesn’t quite allow for a deep dive some readers might prefer. Part of this fits in with the scope of the first-person narration — if certain social issues aren’t immediately relevant to Davin’s unfolding experience, then they aren’t addressed too much — but it also leaves some things just hanging out there. As a result, there are a few areas for exploration and story threads that might leave some readers wanting more.

Regardless, River of Souls is grounded first and foremost in its characters experiences, and the main characters have a well-inscribed arc and the novel finishes their story … although with such a rich premise, the possibilities for future developments abound. It’s a testament to Bodine’s creative power that the premise of River of Souls is so rich and ripe for speculation. It’s certainly a milieu that readers will want to keep exploring (and hopefully will have that chance!).

T.L. Bodine’s River of Souls is a rich novel that grounds a horrific premise in a fresh viewpoint and relevant context. By focusing on its relatable characters’ personal journey through a world more closely our own than the genre’s usual post-apocalyptic escapism, River of Souls not only gives the zombie narrative a hearty helping of brains, it gets that dark heart beating once more.