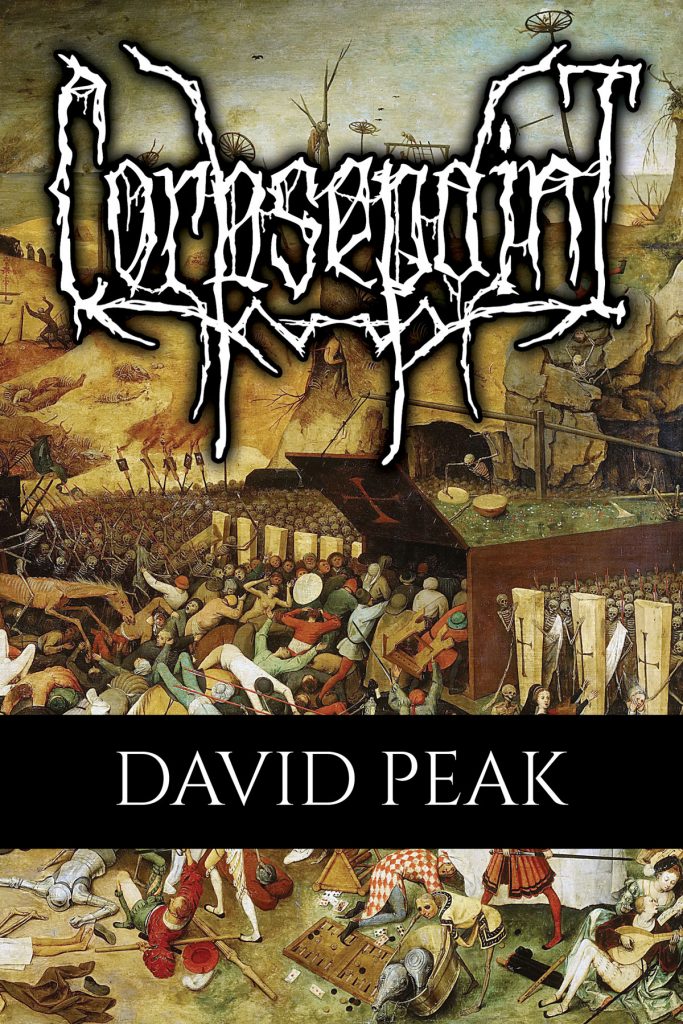 Corpsepaint, the first novel from author David Peak, hits readers like a frigid blast from the howling darkness. From deep in the veins of Lord Leviathan, Corpsepaint is a frostbite wound of philosophical horror – its chill seeps in at the grungy edges until, almost without warning, you find you’ve been maimed and left with only the void.

When the novel starts, it’s been twenty-five years since Max, performing under the name Strigoi with his groundbreaking American black metal band Angelus Mortis, first broke through. After three classic albums established him as a legend in the scene, though, years of excessive drink, drugs, and nihilistic darkness have left Max washed up for the last decade. Fortunately, Max seems poised for a comeback when the Ukrainian band Wisdom of Silenus invites him and his new drummer Roland – a crustpunk kid on the run – to their wilderness compound to record a paradigm-shifting new album. Things may be darker than they seem, however, as the compound is full of mystics and militant separatists, a giant dark castle full of ancestral secrets looms in the distance, and the Lord Leviathan calls to them from the void between the stars. Weaving together the viewpoints of Max, Roland, and Seph, the woman who leads Wisdom of Silenus, Corpsepaint explores the edges of cosmic horror and antihumanism.

For those who have been following Peak through his short fiction and his nonfiction book The Spectacle of the Void, Corpsepaint’s themes should come as no surprise. Over the course of their journey, Max and Roland are tried and tested, stripped and broken, until the more mundane monstrosities on display pale next to the nihilistic threats to existence itself. Peak has managed to create compelling, broken characters within a rich setting that draws from music, mythology, and philosophical horror, but appreciating Corpsepaint doesn’t require any in-depth knowledge of black metal or speculative realist philosophy. Indeed, while those elements can provide an extra richness to the milieu for fans, they are by no means essential to understanding or enjoying Corpsepaint. This is no inside-baseball love letter, but a gripping novel that will appeal to fans of Mayhem, Thomas Ligotti, H.P. Lovecraft, Emile Cioran, True Detective, or any of many other touchstones. Corpspaint has a lot of dark enjoyment to offer readers, metal heads or not.

Although Corpsepaint can be an emotionally bleak read, Peak’s richness of detail is impressive and his writing is crystal clear. His evocative prose conjures up filthy urban streets and desolate winter landscapes that highlight the rough characters and their tribulations, effectively creating an almost unrelentingly grim tone. While doing so, however, he manages to incorporate philosophy and music in ways that avoid becoming either too abstract or overly technical. The novel’s literal embodiments of cosmic horror are effective, but the real show is how Corpsepaint’s prose and setting invoke the subliminal charge of lo-fi, raw black metal and, in doing so, capture the emotional tenor of the music without trying to describe the sounds. Of special note, too, is how Peak’s syntactical structure captures the feel of black metal’s steadily churning rhythms punctuated by riffs, mimicking this effect by employing long and layered paragraphs spiked through with bursts of lyrical lucidity. Despite the unapologetic grimness, Corpsepaint is a delight to read.

Corpsepaint is a slow burn, but as it moves from city to wilderness to the black reaches of the void, the intensity builds and builds into a final crescendo of horror and violence. While there is both real world and supernatural horror here, the real terror comes from the ideas that Peak explores. Like all good black metal, Corpsepaint is cerebral and visceral – by turns bleak and baroque. It is highly recommended for fans of the music, gritty horror, and philosophical dread alike.