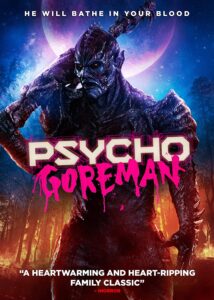 Written and directed by Steven Kostanski, who is part of Canadian filmmaking group Astron-6, who are known for producing low-budget, 1980s-centric independent movies that often combine horror with comedy. Yeah, they’re usually silly, campy, bloody, and a lot fun. But then in 2016, Steven broke from the usual Astron-6 mold and did a serious, albeit still gory as hell and very fantastical film called The Void, and I loved it. But here he goes back to the silly fold, so is it a backwards step for the movie maker or a fun return to what got him started? Well, let’s find out.

Here it’s the classic tale of an intergalactic warlord bent on destroying, well, everything, who is imprisoned, genie-like, into a gem. Two young kids, a bickering brother and sister, find the gem and in doing so, gain control over the super-powered space psychopath. Hilarity and carnage ensue. This is a clear love letter to shows like The Power Rangers and the Guyver live action movies, only with everything cranked up to 11, including the violence, the cheesy man-in-suit rubber monsters, the gore gags, and the adult, but still juvenile, humor. The characters are cardboard cutouts, but in a film like this you wouldn’t expect anything more. Goreman is a deadpan hoot at times, wishing to destroy everything but barely being kept in check by the kids. The kids themselves are a bit of a mixed bag, with sister Mimi being an egomaniac bully over her brother, and sometimes that’s funny, but most of the time it’s just grating and annoying. That said, the direction by Kostanski is solid, and the writing is good, with a mix of sappy family sentimentality and over-the-top, slapstick-y violence.

Let’s get to the special features on the new DVD from Acorn Media, and they’re surprisingly stacked. First there is a director commentary with Steven Kostanski and interviews with various members of the cast and crew. There is a special feature on the fight choreography, another on the music in the film, and another one being the behind-the-scenes kind. Finally there are three photo galleries: one on the concept art, one on the trading cards, and then a collection of candid behind-the-scenes photos. I think it’s funny that such a low-budget indie film can have some many extras on its release, while much bigger movies from bigger companies seem to doing the bare-bones thing more and more, but whatever.

Psycho Goreman is a very silly film, but it’s the kind of movie that knows exactly what it is, revels in it, and has a lot of fun with it. If you only like “serious cinema,” then you should stay away from this one for sure. If you’re just looking for a good time with a lot of blood and guts. then this cheesy flick will do that for you. If you fall more into the latter camp than the former, then consider this one well recommended.