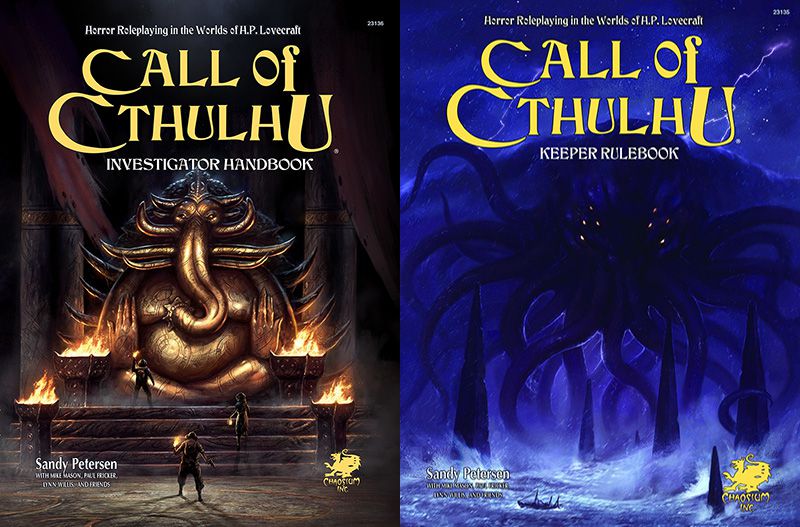 Full disclosure: I have been a huge game nerd for a long, long time. I know that nerdy culture is now more accepted, heck celebrated, these days, but I’m old, that wasn’t always the case, so it’s hard for me to admit that publicly. And this review is for us. For all the loyal Cthulhu cultists out there. The flingers of funny-shaped dice. Those that love to get their game on.

This is the latest edition of the venerable, highly rated, multi-award winning role playing game: Call of Cthulhu. Based off the literary works of H.P. Lovecraft and the rest of those that were, and are, part of the Lovecraft/Cthulhu Circle. It’s one of the oldest RPGs still being made, and according to many, including myself, it’s one of the best, if not the best. Bar none. Don’t just take my word for it, see what the game lovers over at Geek and Sundry had to say when they named it the best RPG of all time earlier this year: http://geekandsundry.com/the-best-rpg-of-all-time-is-call-of-cthulhu/

To focus that statement even more laser fine, it is the best horror game ever made. Largely because of its legendary and infamous lethality towards the characters the players run in this game. No one is super powered here – running away is usually the best choice when facing eldritch abominations, and if your feeble investigator doesn’t die outright, chances are they will be driven insane. It is that fragility that fosters a sense of horror, and because of the overwhelming odds against the players, the fact that they soldier on anyway is a true definition of heroism. It’s easy to be brave when the person you’re playing is a 30th level cyber-barbarian-wizard-assassin badass wrapped in armor and totting around a rocket launcher. It’s much more impressive when your game avatar is a 56-year-old librarian with asthma facing down a monster that eats bullets for breakfast and asks for more. In the world of gaming, be it tabletop or online, Call of Cthulhu is singularly unique. There is a reason it is so beloved by gamers everywhere, and for decades it has remained largely untouched. Until now.

Fuller disclosure: the first thing I wrote that was ever published was for the Call of Cthulhu game. I have since wrote a lot of things for them over the years, and I still write for the game today, so does that mean I’m going to toss this one a softball? Am I going to be blinded by my past experiences with the game to give this one an easy pass? Hell no, if anything, it’s the exact opposite. When I first heard that Call of Cthulhu 7th Edition was going to drastically change MY Call of Cthulhu, I was diametrically opposed to it. “It’s not broke so don’t try to fix it!” I shouted as loudly and frequently as I could. So I had a huge Cthulhu-sized chip on my shoulder when this finally came out. Was that chip knocked off or is it still there?

Thankfully, it was thoroughly knocked off.

The new edition makes a lot of smart changes to the core ruleset. It has modernized things from where they began over 30 years ago. It has added stuff like the novel push system (where a character can try another attempt at a failed roll, but with a decidedly bad outcome should that roll fail again) that has been needed in this game (hell, any game) for years. It has shifted the focus a bit onto combat, and honestly, I’m not a big fan of that. But here’s the best thing: most of these changes are optional. Unlike many games that have a new edition come out and drastically change everything with a never-look-back attitude, this take-what-you-like-and-leave-the-rest approach was built in from the start. This is smart game design that is still true to the feelings of horror, dread, and wonder that the older versions of the game was. Not a thing has been lost, lots has been added, most of the additions work wonderfully, and those that don’t work for you, you can ignore. That is the very definition of a win/win.

To start your own sanity-loosing, fearful fun, there is the Call of Cthulhu 7th Edition Keeper Rulebook (keepers are like dungeon masters or the more generic game masters of other RPGs) and Call of Cthulhu 7th Edition Investigator Handbook. Both of these are mandatory to play. There are also other supplements out now or coming fast, like the Keeper’s Screen; a collection of scenarios called Doors to Darkness; and a campaign called A Time to Harvest. Fullest disclosure: those last two things I have a large hand in, but again, that should do nothing but illustrate how good the new edition of my favorite game is. I was all ready to write this new version of my beloved Call of Cthulhu off and never pen another thing for it. The fact that I still am should be seen as nothing but a ringing endorsement.

Call of Cthulhu 7th Edition is a must have for fans of the older version of Call of Cthulhu, horror gaming, the Cthulhu Mythos, and H.P. Lovecraft. It has given the old game a much needed shot in the arm; the new art style looks amazing, the rules are easy to understand and implement, it has the same great feeling of what came before, and once again, if you don’t like some new idea this book has, don’t use it. For all those reasons I highly recommend the new path this Great Old Game has decided to go down and I am interested in seeing where it goes.