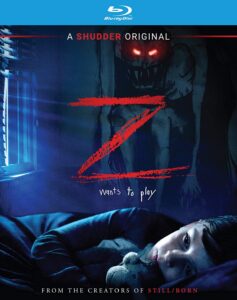 Another original from horror streamer Shudder and RLJE Films. Man, they’re just killing it with the releases, and I love that. This one is about what seems to be a hot trend all of the sudden: imaginary friends and the unexpected horror they bring. Not since 1991’s Drop Dead Fred have fake friends been all the rage. Just this year alone there was Daniel Isn’t Real (incidentally, that is also on Shudder), the upcoming Come Play, and this one. There might even be others I have forgotten, but I guess in this year of lockdown and social distancing, imaginary friends might be the only friends you’re seeing. Having them turn on you now seems about right. So let’s whisper to best buddies no one else can see and find out if this movie is worth making friends with.

Josh is a kid that doesn’t have too many friends, so he makes one for himself…or does he? Yes, next thing you know little Joshua is playing with his invisible friend, telling him secrets, and having a great time. But he is also…changing. He’s doing bad things like becoming a little jerk at school, frightening all the other kinds, and painting Z in all his horrid glory on his bedroom wall. And only dear old mom seems to really notice all the changes, and is getting increasingly scared for her child, her husband, and herself. I wonder why that is?

Z plays with the idea of forgotten secrets, the invisible world of the supernatural, evil kids, and more, and it does all that very well. Most of this movie has a wonderful creeping dread throughout, but it also has its fair share of shocks, including one of the rarest things in horror movies today: an effective jump scare. It also has the rarity of having a child actor that’s not completely awful, not to mention a few good twists and turns along the way.

On to the extras on this new Blu-ray from Shudder and RLJE Films. And once again, sadly, there’s not a single bonus feature on here. What, does no one like them anymore? I still do, and I think it’s inexcusable not to have something, anything, on a disc other than the movie. I mean, I guess the real reason to have this Blu-ray is to have the movie, but still, a little love shown to it would go a long way.

Z is a damn good horror movie dealing with imagination, the power we give to that, and how it can get out of hand. It’s a film I’ve not heard too many people talk about, and that’s a shame, so consider this your official notice not to let this imaginary friend pass you by. Despite the bare-bones Blu-ray, this release is recommended.