Blu-ray Review: ONE CUT OF THE DEAD 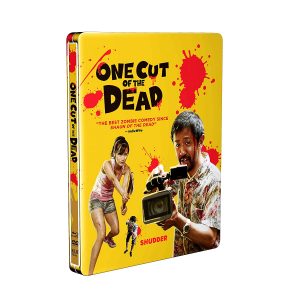 One Cut of the Dead
Blu-ray/DVD
Reviewed by Brian M. Sammons

I love that the horror streaming service Shudder, owned by AMC, is releasing some of their exclusive movies to disc so that those that don’t have the service can also enjoy the films. Or in my case, just add great movies to their home libraries. Their latest release on Blu-ray and DVD combo pack is this Japanese import, and it comes in one of those cool steelbook cases that collectors go gaga over. But is yet another movie about zombies worth a purchase? Well, grab your camera, memorize your lines, be prepared to get bloody, and let’s find out.

The big claim to fame for this movie is that it starts off with a 37-minute-long scene without any cuts. That is the “One Cut” of the movie’s title, and it took two days and six takes for the cast and crew to get the perfect one. That mini-movie is about a low-budget film crew making a low-budget zombie film, but something goes wrong and oops, real zombies show up and start eating all the actors. Well, not really. This horror/comedy then goes into the past, showing what leads up to the zombie short and the director, cast, and crew coming together. Then we get the shooting of that same starting movie, but this time showing how they pulled everything off with behind-the-scenes footage. We see how they have to overcome various unexpected obstacles as they come up, and that bit is really where this movie shines. It’s funny; all the actors do great work not only playing their “real” selves but the characters within the movie within a movie. Now it must be said that this film is not a horror movie at all, but it is a love letter to the art and passion of filmmaking, and in that this movie excels. And once again, it must be stated, this movie is hilarious.

On to the extras put on this Blu-ray and DVD two-pack from Shudder and RLJE Entertainment. First off, for all those who hate subtitles, fear not, for there’s also an English dub track here. So don’t let a hatred of having to read while watching a film stop you from watching this movie. And for you people who like hearing the original soundtrack, that’s here, too, backed with subtitles. As for special features, there is a collection of on-set outtakes and a photo gallery. There’s a Go-Pro version of the first 37-minute-long scene, shot from a Go-Pro on someone’s head, so that was neat. You get to see even more behind-the-scenes goodness watching this. Lastly there is the POM! instruction video, as seen in the movie, that is presented in its entirety. That bit of self-defense silliness had my wife going around the house yelling POM! for days afterward. Fun.

There is a reason One Cut of the Dead made a big splash when it came out, other than the one long cut. There was a spin-off two years later, and there’s an American remake reportedly in the works right now. That reason is because this movie is so damn good and very well made. I highly recommend it for horror and comedy lovers, and/or fans of filmmaking in general.