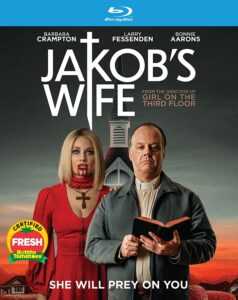 I love that 80s scream queen, Barbara Crampton, has returned to acting and horror in a big bad way. She’s absolutely killing it, and never more so than in this film where she’s in the lead as the titular wife. Assisting her as her more than able costar is filmmaker and actor Larry Fessenden, and he’s always fun to watch. This movie first came to horror streaming service Shudder, but like many of their exclusives, it has now come out on Blu-ray from RLJE Films. Is it worth getting on physical median for your home collection? Well, grab a crucifix, maybe some garlic, and let’s find out.

Here Barbara pays a woman named Anne who’s married to a small-town minister…and while she’s not living in misery, she does feel unfulfilled and has a nagging feeling that there is more to her life than just living with her good but boring husband, Jakob, who is played by Fessenden. Into this tiny town comes a vampire and, wouldn’t you know it, the housewife’s and the bloodsucker’s paths soon cross, leading to the woman getting bitten and becoming a creature of the night. Now the two must pit their love against this new, unnatural challenge, where the vampire plague is spreading and Ann is discovering both her long forgotten desires and new appetites.

This movie is the rare horror/comedy that delivers on both aspects of that, sacrificing not too much from one genre to appease the other. There are legitimately creepy moments and more than a couple laugh out loud jokes. Crampton and Fessenden are both excellent in this and play their parts very well. Bonnie Aarons is great as the Nosferatu-like master vampire, and the always entertaining Robert Rusler has a small but memorable role. This is director Travis Stevens’ second feature film and his second horror movie, so I hope he stays in the genre for a while, because I would very much like to see what he does next.

On to the extras and bonus content that RLJE Films has put on this new Blu-ray. First, there is a making of featurette that runs 13 minutes. There is also a collection of deleted scenes, but sadly, that’s it. So while it’s not a bare-bones disc, I have to say that I would have loved a commentary track with Crampton and Fessenden at the very least. But hey, I guess we should be grateful for what we got.

Jakob’s Wife is a great movie. Without a doubt I am sure it will make my Top 10 Horror Movies of 2021 list, and it will probably appear at the top. It’s fun and funny and frightening. Barbara Crampton and Larry Fessenden have great chemistry together and both do some of their best acting work ever. I am glad this is on Blu-ray and I’m happy to have this one in my collection so yeah, I can easily and highly recommend this one.