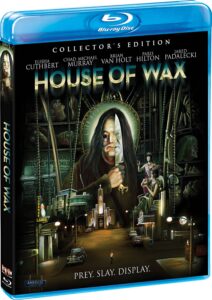 This is one of those in-name-only remakes that barely resembles the 1953 3D classic with Vincent Price expertly cast as the mysterious lead. Funny thing is, that was itself a remake of 1933’s Mystery of the Wax Museum, but I digress. Unlike many other “remakes” that just want to cash in on name recognition—see 2008’s Prom Night or 2009’s Sorority Row (or better yet, don’t) for examples, this one isn’t an absolutely horrible cash-grab. But is the new Collector’s Edition Blu-ray from Scream Factory worth a get? Let’s find out.

Some disposable “kids,” with the most disposable person of all, Paris Hilton, being among them, are on a road trip to a football game. They camp in the woods for the night, meet a creep in a truck, and in the morning one of their cars won’t start. So it’s off to the nearby small town for help, and there is where a secret is discovered and the horror begins. The town is eerily quiet, the residents seem off-putting and none too friendly, and a local wax museum is a literal house of wax. As in, it is physically made out of wax. Yeah, because that’s very practical. Anyway, before you can say WTF? A wax-faced killer is stalking people, killing them, and adding them to his morbid museum of carefully concealed corpses.

This is a fairly basic slasher, more slash-tastic and better than most of the mask and knife flicks that followed in the wake of Scream. The kills are good and brutal, the killer is memorable and meaningful, and while the actual house made of wax is a tad silly, it’s nothing if not unique. I really like the creepy, sleepy town the story is set in. Again, it’s not exactly realistic, but fun. As for the characters, Elisha Cuthbert makes for a good, badass final girl, Chad Michael Murray is fun as the bad boy with a heart of gold, and the rest are all serviceable, including Supernatural‘s Jared Padalecki. All kidding aside, even Paris Hilton is okay in this. She’s far from great, but she’s not as horrible or annoying as I would have thought. And yes, you do get to see her get killed real good, so there’s a bonus for all the Paris haters.

Let’s get to the extras on the new Blu-ray from Scream Factory. There is an interview with “actor” Paris Hilton and another with actor Robert Ri’chard. There is another one with makeup effects artist Jason Baird, and a fourth one with composer John Ottman. There is a B-roll and bloopers collection with commentary by some of the cast. Then there are the featurettes. There is one with producer Joel Silver on the original location, and another on the design of the titular house made of wax. There is an alternate opening, a gag reel, a whole bunch of short, vintage (i.e. from 2005) interviews and a featurette. Lastly, the ever-present theatrical trailer is included in this impressive collection of goodies and extras.

House of Wax is no patch on the Vincent Price classic it borrows its title from, but it is a fun slasher with neat gimmicks in the house and town. It has some decent kills, a memorable killer, and some dippy characters you really want to see die. Yes, that goes double for Paris Hilton’s vapid avatar of herself. It’s slasher 101, but it’s well done and one of the better modern-ish stalk n’ slash flicks. If that’s your kind of bag, as it is mine, then I can easily recommend this movie and new Blu-ray. This comes out July 13th.