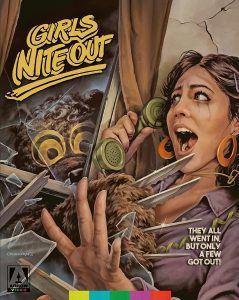 Girls Nite Out is not a a great horror movie, but it sure is a fun one, and one that often seems to be forgotten. Three cheers, then, to Arrow Video for taking the time to not only bring this forgotten 1982 slasher flick out on Blu-ray, but to do their usual awesome job with the release and include a whole bunch of extras and goodies with the movie. As for that movie, well, grab your friends for the big scavenger hunt, stay up all night listening to the radio, stay away from any strange bears, and let’s find out.

This slasher is set at a college that has a tradition of an annual all-night scavenger hunt. Fun times! Unfortunately, this time it looks like a murderous lunatic has escaped from the nearby asylum and has returned to the college where, years ago, he had murdered a coed. Now, wanting to get some more killing done, the killer gets all the answers to the scavenger hunt so he can ambush his new victims. To disguise his appearance, the psycho kills the school’s mascot so he can wear his full bear suit, complete with a steak knife, Freddy-like claw. Yeah, it’s weird as hell and kind of hilarious to see the the big bad murderer in a big, fluffy, cartoon bear outfit, slashing his hapless victims to death.

Let’s get to those extras on this new Blu-ray from Arrow Video. First the psychical goodies they never skip out on. It has a slipcase, reversible cover art, and a 23-page collector’s booklet, which is really nice and seems to be a rarity these days. Now on to the special features. There is an audio commentary track with authors and slasher fans Justin Kerswell and Amanda Reyes. There’s an interview with actress Julia Montgomery, another with actress Laura Summer, yet another one with actress Lois Robbins, one more with actor Paul Christie, a fifth interview with actors Lauren-Marie Taylor and John Didrichsen, and lastly an archival set of interviews with many of the cast and crew. That’s a lot of people talking about this flick. Then there is an alternate title card, and some original trailers. That’s a whole lot of goodies for such a forgotten little film, and I love Arrow for that.

Girls Nite Out is nothing amazing, but it’s funny, has some likable characters, and one of the most original-looking and unique killers in all of slasherdom. It’s one of the many masked maniac movies that came out in the 80s and if you are a fan of slashers then this movie is for you. Also, if you’re looking for something a little different and slightly off-kilter, then this is also for you. I am addicted to 80s slashers and Arrow Video put out an excellent Blu-ray, so I can easily recommend this one.