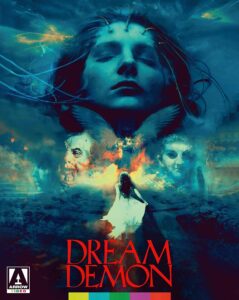 Another new release to Blu-ray from Arrow Video that I had never heard of before. Maybe it was a bigger deal in the U.K., where it was made? I don’t know, but I was excited to watch this 1988 horror flick that seems to take a lot from A Nightmare on Elm Street. Hell, there’s even a burnt up guy in here at the heart of the story, but I digress. Anyway, let’s bounce with that dreamy, rubber reality that I like so much, and have a time with some Dream Demon(s).

First off, this is the director’s cut, but since I’ve never seen it before, I couldn’t tell you what was once cut out, but I thought I should mention that. As for the story, a young woman about to marry a British big wig (I think he’s a minor royal or something) begins having terrifying dreams about the blessed event. Her waking world is no picnic, either, as she’s stalked by obnoxious paparazzi, one played expertly icky by Timothy Spall, the rat dude from the Harry Potter films. The bride to be (Jemma Redgrave) meets up with a spunky American (Kathleen Wilhoite, who was the punk rock psychic in the awesome Witchboard) and the two become fast friends. Then the two women begin to realize how inexplicably connected they are when Jemma’s nightmares start bleeding into the real world and death soon follows.

This movie is a mystery with more dream scenes than a Freddy Flick. Some are good; some are not so good and seem a little padded and unnecessary. That is, they don’t add anything to the ongoing story, they are just sort of there. Sadly there is a bit of that in this film, so much so that maybe 15 or 20 minutes could have been cut to make things tighter, but with it already being just a 90-minute movie, I guess that would have been hard to do. Shame, because when things do work here, they really work, and Dream Demon can be a lot of fun and frightening. It also has some surprising gore gags that made me smile, and while unexpected, those are never a bad thing.

Let’s get to the extras that Arrow Video gave of us on this new Blu-ray release. I’ve already said that this is the director’s cut, but the original theatrical cut is on here as well. So that’s cool. There is an audio commentary track with director Harley Cokeliss and producer Paul Webster. The director returns to introduce the movie, and then again for a full-length interview. The aforementioned Paul Webster also does his own interview, as do actors Jemma Redgrave, Mark Greenstreet, Nickolas Grace, Annabelle Lanyon, and last but not least, composer Bill Nelson. Boy, that’s a whole bunch of talking heads. There is a vintage behind the scenes featurette from 1988, theatrical trailer, an image gallery,  and the original script, complete with notes, and the complete storyboards by noted comic book artist John Bolton, so that was really cool. That’s a whole lot of goodies.

Dream Demon is a bit uneven and there is some drag, but it’s a good well-made film that plays with reality and that’s always a hit with me. If you like nightmares and dream logic with your scares, this one is for you. Consider it recommended.