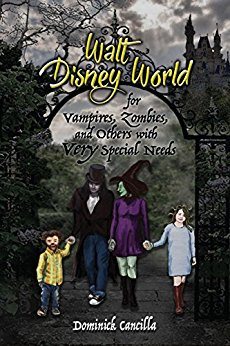 Walt Disney World for Vampires, Zombies, and Others with Very Special Needs is a unique, but much-needed guide book for exceptional travelers. While worthy of kudos for being painstakingly exhaustive, the author warns us that is not totally inclusive. For example, the sharks of Sharknado will find no use for this text since they are incapable of making decisions on their own.

While reading, I became aware of all that I overlook in terms of the special circumstances some creatures have. It is not as easy to get around by broom as it seems, or to have to be aware of lunar changes, or to be under the power of a mad scientist. This book addresses those needs as well as a plethora of others. Cancilla helpfully lists what rides to avoid if you are an “unphotographable,” and alerts creatures to triggers such as offensive stereotypes that monsters, ghosts, and spirits may want to avoid. Cancilla even remembered to address the pesky issue of having to be invited before entering for vampires. While this invitation-only clause offers protection for non-vampires, it can cause concerns at hotels and exhibits that appear to be houses (Haunted Mansion, Cinderella’s Castle, parts of the Many Adventures of Winnie the Pooh).

There are many inside jokes for monster enthusiasts. Most come in the way of “letters from readers.” For example, Gomez Addams writes about the difficulty of having Thing travel with them when security insists on checking the box in which he most often appears. There are appearances from famous folks of urban legends: Bloody Mary requests information for those who really enjoy the use of mirrors. She is not only asking for herself but also for the Evil Queen and Candyman. I really could not get enough of this book and was saddened when I reached “Zombies” in the alphabetical creature codex. If I can offer one correction and only one correction amongst the densely packed nearly 200 pages: we “Mistresses of All Evil” would never deign to visit Disney World so we do not need an entry in the codex. We have no need for an imaginary “small world” when we own the real one.

Honestly, I loved this book. It’s kitschy and clever and an utter delight for a mythology and cryptozoology scholar such as myself. Biggest complaint: I am currently getting rid of books in anticipation of relocating, but I have to hang on to this one for several rereads and for Disney tips. This is a must-own!