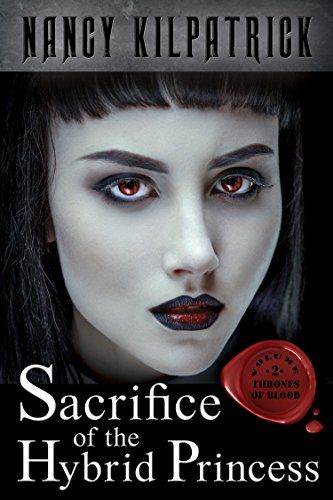 Nancy Kilpatrick’s Sacrifice of the Hybrid Princess reminded me that when vampires “court,” it is very different from the anachronistic way that fundamentalists use the term.  Extremely different.  So different, in fact, that I should not be reading about vampire courtship rituals while on the bus, blushing lest anyone accuse my literary tastes of circling the “50 Shades” drain.  Pun completely intended, the courtship scenes were dead sexy, just as they had been in Book 1.

In fact, much of Kilpatrick’s story is sumptuous, with lavish descriptions of costumes and grand castles.  From the Vampir’s private royal garden, to the physical beauty of the main Vampir characters, Kilpatrick crafts a world where the vampires are to be admired (and lusted after), not feared.  That role is reserved for the truly nasty Sapiens and their dastardly tyrant, King Zador.

The titular princess is Serene, daughter of Vampir King Moarte and Queen Valada.  The story begins with Serene in full petulant mode-a teenage terror-being promised in marriage to her father’s second in command, Wolfsbane.  Put aside the fact that Wolfsbane is several centuries her senior, he is also still grieving the loss of his love, also named Serene (Book 1 documented their romance).  Wolfsbane is as unenthusiastic about the impending nuptials as the Princess.  Yet, his loyalty is to his King and Queen, and he endeavors to develop a relationship with the Princess by breaking her spirit and gaining her obedience.  This progress happens through some steamy S&M scenes (recall my blushing on the bus) that are well written and build with a perfect pace.

Serene is a hybrid and while she appreciates her Vampir clan, she fantasizes about the Sapien side of her family that she doesn’t know.  She imagines an idyllic relationship with her grandfather, Zador, and sets off to make him aware of her existence.  This is when all hell breaks loose and the story becomes taught, horrific, and suspenseful.

I won’t go into detail about the torture that King Zador inflicts on Serene I will leave that up to Kilpatrick who is skilled at making readers squirm.  Just know that the Sapiens are truly horrible, but they are no match for their vile king.

One of the many aspects I admire about Kilpatrick’s storytelling is the way she utilizes vampire mythology to explore nuances that remain unique.  For example, Wolfsbane encounters a Sapien soldier with a family resemblance and similar surname. This invites the opportunity for the Vampir to imagine what has happened to his bloodline in all of the years that he has been removed from the Sapiens’ world.  New characters are introduced in Book 2, including (another nod to mythology) Vampir Lamia: a mysterious and powerful ruler who may or may not have mixed loyalties.

I loved Book 1 but I will admit that I loved Book 2 even more.  The characters were comfortably familiar but the threat level has been escalated to nail-biting proportions. I devoured the book quickly; it was difficult to put down, but I am used to this when in the hands of a skilled author like Kilpatrick.  She truly is a “vampire queen”: a real specialist at telling vampire tales in new and engaging ways.

I am excited to read The Abduction of Two Rulers: Thrones of Blood, Volume 3 and if you have not read Books 1 and 2, you are missing out!  I highly recommend Sacrifice of the Hybrid Princess, but would also recommend readers enjoy the entire series and begin with Book 1.  Book 2 does work as a stand-alone, but there is no need to deprive yourself of the joy of Kilpatrick’s writing.