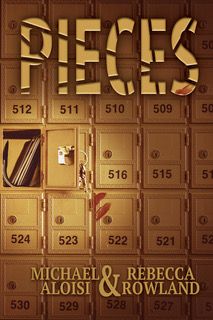 Pieces is the story of killer Dennis Sweeney, who abducts Julie Piedmont, dismembers her, and sends thirty pieces of her body to random recipients across the country. Dennis, like many killers, desires attention. He selected his victim for maximum press coverage: a blonde white woman. He also sends letters to journalist Jackson (Jax) Matthews and is labeled “The Hangman” by the news.

While thirty pieces are sent via mail, only eighteen are turned over to authorities. Pieces includes the stories of the twelve that were kept along with the perplexing and unsettling reasons why the recipients may have chosen to retain fingers, intestines, breasts, etc. This was the engaging and unique aspect of Pieces. We have all read and watched numerous serial killer stories, but the chapters dedicated to the people who were mailed pieces of Julie were very interesting. Each of the dozen characters were fully developed. Each were also deeply flawed. Their flaws lead them to believe that there is a reason why they received a boxed body part, and they interpret the specific part through their personal lenses. It would have been easy for this technique to become repetitive, yet Aloisi and Rowland provide distinctive and well-thought-out misunderstandings in regard to the packages. Knowing that the missing parts will only hinder investigations, and also infuriate the fame-hungry killer, heightens the tension.

The character of Julie Piedmont exemplifies the nameless, faceless body parts that are dispatched across the country. We know little about her, beyond the automatic sympathy one feels for a murder victim. But that is the point: Pieces is not about Julie, just as her death is not really about her either. The story is about the killer who committed the crime, the journalist who is not so sure he wants any involvement with the case, and the twelve unsuspecting but “deserving” characters who receive body parts.

As a mythology, folklore, and urban legend buff, I appreciated that Dennis’s mother felt the need to explain the dark truths behind old nursery rhymes. I too love to tell those stories, only I am more careful about not scaring young children!

Pieces is an engaging read. I was intrigued by the twelve different character studies of the body part recipients. In fact, I would have been happy with a book of just those stories bookended with a preface and prologue of Dennis to provide structure. Those stories, to me, were the heart of the book and what made it stand apart from the other killer stories I have read.