Movie Review: THEY CRAWL BENEATH 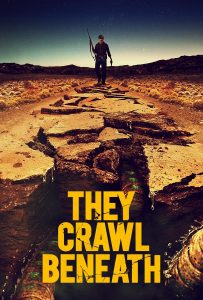 Plot Synopsis:
Young police officer Danny (Joseph Almani) is working on an antique car at his uncle’s remote ranch when a major earthquake hits, pinning him under the vehicle and leaving him bloodied, alone, and with no way to call for help. Just when he thinks the claustrophobic nightmare can’t get any worse, something truly horrifying emerges from the fissures in the ground, forcing Danny to engage in a brutal fight for his life—and his sanity.

I will be honest: I did not have high expectations going into this movie, and that was primarily because of the trailer. For some reason, the trailer felt…off. I can’t put my finger on it, but something about it made me leery to see the finished product, even despite the fact that this film boasts practical special effects. But I decided to push my hesitation aside and give THEY CRAWL BENEATH a look.

Despite my misgivings, the film is actually pretty good. It is not a great horror flick per se, but it is fun and intense, and definitely worth a watch.

One major sticking point for me from the trailer was the acting: it looked very subpar. I quickly realized that is because the producers chose the most wooden scenes in the movie to use in the trailer. There were MANY other scenes they could have used which would have showcased that acting chops of lead Joseph Almani and his co-stars. Almani does a decent job in the scenes that lead up to the chaos, but he really cranks things up when life-or-death gets involved. I had no problem believing he was indeed in danger.

The story of THEY CRAWL BENEATH is not overtly original, nor does it have to be. This is one of those movies that knows what it is up front and doesn’t try to reinvent anything. I think that’s another reason I appreciated the film as a whole.

The special effects are decent but not great. I was hoping for more gore, but there’s very little here. Also, I would swear there are two scenes of computer generated effects, both that involve one of the titular creatures bursting out of someone’s body. I’m not one hundred percent sure, but they look like they could be to me.

I really enjoyed how suspenseful the film gets when Almani is trapped under the vehicle. He does a great job fleshing out his character’s faults while trying to free himself; he has to fight a lot of self-doubt and grasp at several things as he tries to find a reason to keep trying. This intensity is a big part of what made the film so fun for me.

THEY CRAWL BENEATH has two negative aspects that I have to mention; these are not detractive enough to keep me from recommending it, however they are worth noting for anyone interested in viewing it.

First, the cover art is very misleading. Ninety percent of the film takes place inside the shop, and nobody walks around outdoors with a rifle. This isn’t a big deal but I feel slighted when covers mislead me like this.

Second, the trailer gave me a very distinct TREMORS feel, which is what I assumed the film would be like. Thankfully I never got that vibe inside the movie itself, but I almost didn’t watch the film partially because I thought it was going to be a rip-off. This could mislead other viewers and keep them away as well.

THEY CRAWL BENEATH is a lower-budget creature-feature that is sure to please most fans of horror fare in one way or another. It does not pretend to be something it isn’t, and it never tries to convince the audience it is anything other than an intense, albeit somewhat-shlocky, thriller. What it lacks in budget, it makes up in heart. I don’t feel that it will win many (if any) awards, but I still recommend watching it nonetheless.