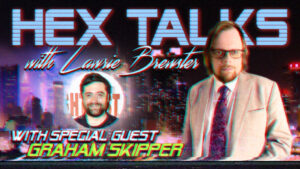 Hex Studios, the horror house behind The Devil’s Machine and The Black Gloves, has recently been making waves with their new YouTube channel Channel Hex. In the few short months since its inception, the channel has showcased indie horror shorts and features, hosted an online horror film festival, and produced two brand new movie review series. The latest addition to their slate is perhaps their most ambitious yet. Retro interview show Hex Talks sees Hex Studios founder Lawrie Brewster take the role of chat show host in a series of interviews with icons of the horror genre.

First up is an in-depth discussion with genre renaissance man Graham Skipper. Perhaps best known for playing the role of Herbert West in Stuart Gordon’s Re-Animator The Musical, Graham has also starred in indie horror favourites Almost Human and Beyond The Gates. In 2017, he got behind the camera for his award-winning directorial debut Sequence Break, and went on to co-produce festival favourite Bliss, directed by Joe Begos.

So sit back, grab a beer, (or beverage of your choosing) and enjoy the first episode of Hex Talks!