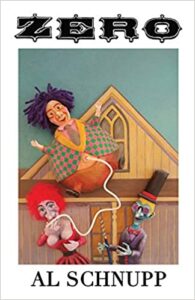 Zero is a political satire that will ring a little too close to home for those of us who survived an unintentionally satirical presidential election. Zero is the name of the main character, a buffoon who is convinced by his wife to run for Icon of Groad, the highest political office of their country. The fact that Zero has no experience, no platform, no ideas, no charisma, and no ethics does not count against him.

The steps to ascend the ladder of power are clearly laid out. First, Zero must kill his father in order to obtain money for his campaign. Then he needs to make appearances, create a commercial, participate in a debate, and offend both the right and the wrong people enough that he is voted into office. He accomplishes this while dodging an inspector who is trying to reveal that Zero is, in fact, a murderer.

Zero was originally a play, Zero to Infinity, and it is easy to picture it being produced on stage. It has the cadence of a play. Chapters almost feel as if a curtain drops at the end of them. The descriptions of the characters are ludicrously colorful with sort of a Dr. Seuss meets Monty Python vibe that would be visually appealing.

What is interesting about Zero is that the characters speak in a vernacular that is playfully lewd.  For instance, as his wife paints the picture for his being an Icon despite not being a politician, Zero says that it “invigorates my bully bag.” Instead of asking her where she got the idea, he says “Who put this percolator in your gizzard?” The use of alternate terminology is tricky to pull off, but it works to distance the political commentary from any real-life associations. Those associations were still present; I suffered a bit of PTSD from the debate scene, and the zingers hit pretty hard to the right, which may limit readership.

Zero has the “nudge, nudge, wink, wink” bizarro element that is currently popular (think Rick and Morty). The country of Groad is in no worse of a state than our own, and its candidates for Icon are familiarly inappropriate. Anyone still licking their wounds from the 45th president will find Zero funny, as well as a bit of a panacea for residual gaslighting.