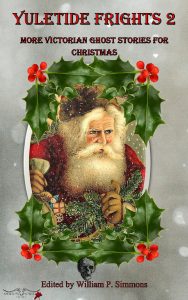 As most of us probably know, the Victorians had a tradition of telling each other spooky stories, many involving ghostly encounters, at Christmas time. Some of these stories were actually set during the holidays, others were just generally scary tales. While we’ve fallen away from this tradition, sadly, a small fraction of published stories in this tradition have been made available in recent years. While I missed the first Yuletide Frights collection when it was published, I’m very please to say that William P. Simmons has brought us another fifteen Victorian spooky stories in Yuletide Frights 2.

Simmons has done an excellent job of selecting Victorian ghost stories that can resonate with and be enjoyed by modern readers. I’ve read many of them over the years, and some just don’t work well in the twenty-first century, but I’m pleased to report that all of these do. Simmons has also provided very good biographies and historical contexts for each of the authors and their work. I would note that a surprising number of the authors were women, despite their frequent use of male pseudonyms.

Because this collection is so chock-full of good stories, I’ll only be able to touch on a few of my favorites.

Most of these stories are relatively straight-forward ghost stories, or stories involving human spirits remaining present on Earth and sometimes terrifying the living. But not all! A small number are what I’d call a kind of cosmic horror, and that includes “The Tower” by Barry Pain, which concerns a “haunted” tower, a quarry with a bad reputation, and some monstrous and unearthly beast(s). What more could one ask for? We’ve also got some sort of…oh I don’t know, a demonic shapeshifter in “What Was He?” by Theo Gift. He seems to like murdering newlywed brides.

While the majority of the collected tales take place during the Christmas season, which makes sense given that these stories would have been especially popular at Christmas time. One of the exceptions to that general rule was “On the Leads” by Sabine Baring-Gould. Like several of these stories, this one involves a creepy rented house that has a long, dark history of being haunted. Here we have some terrifically terrifying imagery about a ghost that appears on the roof every night. Sometimes you’ve really just got to burn the place down to get rid of the ghost. Nicely done.

Most but not all of the stories here involve the supernatural. One of my favorites that does not is “A Christmas Tale” by Margaret Oliphant. In a local country squire’s family, the offspring of each generation is a single son, and each generation takes a vow. When the son comes of age and is ready to inherit the family’s estate, the father, well, does himself in. Generation after generation. Pretty grim, isn’t it? Another was “Jerry Bundler” by W.W. Jacobs. If Jacobs’ name sounds familiar, it’s because you’ve read his most famous story, probably many times: “The Monkey’s Paw.” In this one, winter travelers are scaring each other with ghost stories while staying at an inn, and one of the travelers decides to play a prank on the others. That turns out to have been a very bad idea.

Most of the stories are set in traditional English settings: manor houses, country villages, or even London itself, but one of my favorites is set outside those traditional locales, though it’s still set in a quintessentially Victorian location: India. In “The Dak Bungalow at Dakor” by B.M. Croker, two young British women are traveling to meet their husbands for Christmas when they are forced to stay in traveler’s lodging in a remote area. There they witness a horrific but ghostly murder, which helps solve the disappearance of a British official years previously. Very nice suspense.

And some of the stories are simply wonderfully atmospheric, and creepy, traditional ghost stories. I’d be remiss if I didn’t mention an understated one, “Bone to His Bone” by E.G. Swain, which involved a bibliophilic ghost and a wonderfully described library in a country vicar’s home. While the title of “The Dead Man’s Story” by James Hain Friswell is a bit on the nose, I salute Friswell’s willingness to experiment. We’ve got a man who dies, and Satan promises to return him to life so that he can be the woman of his dreams. Satan, it seems, is a bit of a romantic and just wants these two to be together. But of course, it being Satan, things don’t turn out as planned. I would also note “The Ghost of Charlotte Cray” by Florence Marryat, which was fascinating, fun, creepy, and also kind of absurdly hilarious. A man gets married but one of his old girlfriends (Charlotte Cray) keeps coming around to his office and pestering him that she won’t go away until she meets his new wife. He doesn’t want that for obvious reasons, but then Charlotte dies, so he thinks he’s in the clear. As it turns out, even death doesn’t prevent Charlotte from continuing to show up and demand to meet his new wife.

If you’re in the mood for some tales of ghosts and goblins this holiday season, Yuletide Frights 2 would be an excellent choice to add to your seasonal reading. I had a lot of fun with these stories. Recommended.