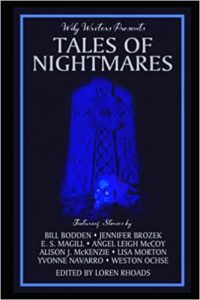 Tales of Nightmares is the second of six anthologies that include stories from authors that are part of the Wily Writers collective. While the theme of nightmare can be applied to nearly any horror anthology, this compilation strikingly shares a dark hallucinogenic tone that ties the stories together despite their distinct plots.

I have recently become obsessed with stories featuring Yokai, so when I began reading the first story, “La Japonesa,” by Lisa Morton, I was immediately engaged. Amanda, a college professor, is conducting research on a mythological cat woman who has been stalking the hills above Los Angeles. This Yokai is an amalgam of her city, “a blend of different cultures. A mix of ghost, human, and animal. The ultimate icon of the Los Angeles melting pot.” While Amanda is trying to learn about La Japonesa, the creature already knows all about her, even where she lives.

“La Japonesa” is followed by “Into the Quiet,” by Alison J. McKenzie. This story fits the anthology as it is written like a nightmare; it is filled with phantoms and dark deliriums. There is a “Yellow Wallpaper” quality to it in that the main character, Shana, is convinced of a reality that the reader clearly sees is suspect. Shana’s visions are creepy and add tension to the sad plot.

“The Dark Watchers,” by E.S. Magill is another story set in the hills of California. In this tale, famous outdoorsman Kimball is ready to end it all when a call to lead a hiking trip pulls him out of retirement and back to life. He has been hired by a strange trio whose sensibilities contrast greatly with naturalist Kimball. The clients’ anti-environment philosophies bring the attention of the Dark Watchers, who will fight to the death to protect the woods.

“Recall,” by Yvonne Navarro, features police officer Warren who was unable to prevent his parents’ murder, which happened during his patrol. Like “Into the Quiet,” “Recall” is about the incessant haunting of memory. Warren is relatable and you root for him to escape his demons.

“Twenty Questions” by Jennifer Brozek is about an online game gone wrong. The narrative structure of having the game span four days is clever and provides mounting tension. The story has many fun twists that keep a reader guessing, almost as if the reader is a part of the game, too.

“The Haunting of Mrs. Poole” by Angel Leigh McCoy contains the evocative character of “the charred lady,” which gives “The Haunting of Hill House” (the series) vibes. The story is set in the Victorian era and the main character, Amelia, is victim to the misogyny of the time period. Amelia is a fan of Immanuel Kant, and his theories help to propel her from victim to victor.

“Glue and the Art of Supermodel Maintenance,” by Weston Ochse, diverges from the more psychologically driven stories of the anthology. This story is extreme horror driven by a very interesting psychopath. Ernie likes to provide anesthesia to the model conquests he brings back to his home. Once they are numb, he is able to indulge in his art, creating a new and entirely different type of model. The descriptions are not for the faint of heart.

“Elle a Vu un Loup,” by Loren Rhoads, focuses on Alondra, who is visiting a small village that has been plagued by mysterious attacks. The violence was first committed against domesticated animals but then graduated to people. Alondra believes she knows what creature is behind the assaults. This knowledge would be helpful if she weren’t stranded on an isolated road with a wounded horse at sunset.

The final offering of Tales of Nightmares is “The House on River Road” by Bill Bodden. This story is told by an adult narrator reminiscing about a tragedy of his youth. The voice reminded me a bit of Stephen King (which is meant as a compliment). The titular house is tied to rumors of evil. Legend has it that the house only appears to teens after midnight and that those who see it are never seen again. One night, the town bully disappears, and Jerry and Ed determine to save him.

Tales of Nightmares contains the work of established authors who know the genre. Each story is skillfully told, both adhering to and bucking the conventions. The anthology is not only entertaining, it serves as a master class in short story writing.