Book Review: THE PUPPET KING AND OTHER ATONEMENTS 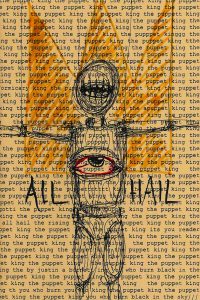 The Puppet King and Other Atonements
Justin A. Burnett
Trepidatio Publishing (May 20, 2022)
Reviewed by Andrew Byers

I can see why Burnett’s prose has been compared to the likes of Jon Padgett, Brian Evenson, and Thomas Ligotti. Part of that is subject matter—Burnett includes these authors’ sense of bleak nihilism and even some similar recurring motifs, like puppets, in his work—but much of that comparison simply derives from Burnett’s prose sensibilities and stylistics. It would be a serious mistake to dismiss Burnett’s fourteen stories in The Puppet King and Other Atonements as hewing too closely to that of Ligotti and Padgett; these are genuinely strong works that stand on their own merits and contribute to the growing body of contemporary cosmic horror.

Space doesn’t allow me to delve deeply into each of the collection’s stories, but I will spend some time with my personal favorites.

Let me start with “Devourer,” which I found to be incredible. On the surface, it’s simple: a music interviewer goes to a decrepit trailer in the middle of nowhere to interview Mike “Devourer” Lowry, a renowned metal musician who’s finally coming out with a new album, but it’s so much more than that. This one is a really subtle and cosmic story that I don’t want to spoil by over-explaining.

In “The Rubber Man,” Kaire is a woman who escapes her entire life—literally leaving everything behind—and travels to live in the ruins of an abandoned lighthouse on a small private island she has inherited. Eerie, creepy, chilling, and again, very subtle. Whatever horror there is in this story mostly exists offscreen, and that very much works.

“Endemic” ended up going in very different directions than I expected, but it’s very, very good. The narrator’s mother was a biologist who has disappeared, leaving behind a houseful of junk and some strange specimens. Pursuing his mother’s research leads him and his family to larger mysteries and sets them in the path of those who don’t want those mysteries coming to light. I don’t want to give anything else away, so will just leave it at that. A really fine piece of cosmic horror. You’re probably starting to sense a theme of ineffable cosmic horror in these stories.

I suspect that “Our Endeavors” will resonate very strongly with readers, as it did me. A man’s son dies accidentally during a family outing, he experiences a great deal of grief in the aftermath of the accident, his relationship with his girlfriend (the boy’s mother) ends, unsurprisingly, and so forth. It’s a tragic tale, but one that unfurls exactly as one might expect. But the framing device for this story is what really makes it so powerful: the man and his situation are being observed by someone (something?), which consistently refers to him as “the subject.” Is he being experimented on by some cruel and dispassionate being? It is being told from the perspective of God? An alien? Some being that instigated the tragedy for its own inscrutable purposes? Who knows, and that’s what makes it so fascinating.

The collection closes with “The Puppet King: A Monologue,” which would have been much less interesting if it had been presented simply as a non-fiction essay that offers reflections on the existential nihilism that (I think) pervades Burnett’s philosophy and his fiction. That’s not to say that it’s not a great non-fictional piece—it is, and one I happen to agree with philosophically—but it’s fascinating because it’s presented as an intensely creepy monologue on philosophy, pessimism, cosmicism, Ligotti, Lovecraft, the roles that humans play, and some reflections (a la Ligotti) on the idea of humans as puppets. It’s the story’s framing device that makes this one work and helps nicely blur the line between fiction and non-fiction.

There’s much more I could say about the remaining stories, but I’ll just tantalize you with some additional elements in Burnett’s remaining stories in the collection: plucked out eyeballs; secret societies; stargazing; symbiotes (always good for a dash of body horror); animated dolls; an unethical psychotherapist who gets his comeuppance; and a hunt for a serial killer with an unusually personal connection to the investigator.

Justin Burnett is an excellent prose stylist and wordsmith. His imagination may be bleak and twisted, but I love him for that. He’s a force to be reckoned with and I very much look forward to more from him. If you appreciate the feeling of being unsettled by a good horror story, and like a sense of the cosmic in your horror fiction, The Puppet King is definitely recommended.