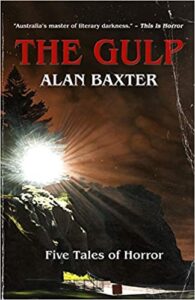 The Gulp is about the creepy town of Gulpepper, a place that has a habit of swallowing people alive. A place where everyone shares the same nightmare/dream each night. The Gulp contains five stories that are wonderfully distinct and filled with relentless tension.

The stories begin on the outskirts of the Gulp with “Out on a Rim.” George Grayson is retiring from his many years as a truck driver and is training Richard Blake to take over. While showing Rich the ropes, George warns him about the Gulp. George is focused on finishing the job, getting out of the Gulp before nightfall, and returning home. An accident with a tire rim means they won’t be able to leave, and George insists on staying the night inside the truck while Rich decides to venture into town. This is just the beginning of Rich’s poor decisions that lead to the realization that the Gulp is everything George had said, and more.

The second story, “Mother in Bloom,” is about teenage siblings Maddy and Zach. Their mother has never been there for them, and now that she has died in her bed, they are forced to be even more independent and have to make decisions such as what to do with her body. They decide to keep her death a secret so that they can remain in the house together and not be separated by social services. They believe they will now have it easy and be able to live the life they want. They believe this until their mother’s corpse begins asking them for things. Horrible things.

The next offering is “The Band Plays On.” Patrick and Ciara are on a trip around the world from Ireland. They, and their traveling companions from Germany, make a stop into the Gulp and see a local show featuring Blind Eye Moon. BEM is a magical band; everyone is mesmerized by their skills and songs and Patrick and his friends are thrilled when the band pays them personal attention. They are even invited to stay the night with the musicians. BEM gives them a creepy history of the Gulp and everyone experiences the same dream while sleeping. Patrick begins to suspect that the band may have some supernatural secrets.

“48 to Go” is the fourth story. Dace is robbed of the drugs he is trying to sell for his boss, Carter. Because of their track record, Carter spares Dace’s life but gives him 48 hours to come up with 60,000 to cover what was stolen. Dace decides to rob a very eccentric old couple and gets much more than he expected when he witnesses crimes worse than those he had been exposed to while in Carter’s employ.

The final story is “Rock Fisher.” Troy Mackay goes fishing, as he normally does when agitated and wanting to escape it all. On this trip, his hook catches something strange in the water. The egg-like creature has an emotional and physical effect on Troy and the culmination of this story ties the previous ones together while leaving room for a possible sequel.

I thoroughly enjoyed The Gulp. The stories can be read as stand-alone tales, but the easter eggs that are threaded through them make them a fun collection and help with solidifying the connection between the characters. This was my first experience with Baxter and he is a wonderful writer. The characters are realistic and relatable, and the plots move along effortlessly, snaring the reader in a web of tension that is unexpected yet deliciously welcome. I highly recommend The Gulp. Horror fans are in for a real treat with this unique collection about a quiet, dimly populated, but very scary village.