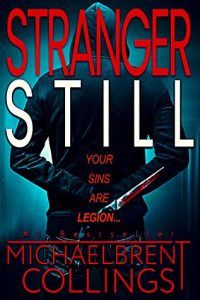 Stranger Still is a stand-alone sequel to Michaelbrent Collings’ horror thriller Strangers, which I reviewed way back in 2013. I enjoyed Strangers a lot, so was very pleasantly surprised to find that after this long hiatus, Collings had returned to that world. In Stranger Still, he takes the villain from Strangers, a serial killer who calls himself Legion, and puts him in conflict with a second serial killer/hitman/torturer who has abducted a female attorney and her fiancé on behalf of a Russian mobster. This takes the characters on a fast-paced collision course with lots of violence along the way.

Let me give you a rundown on the major characters and the situation in which they find themselves. First, let me just say that aside from one of the characters in Stranger Still—the killer Legion—there are no real connections to the first novel in the series, so feel free to read this one even if you haven’t yet read Strangers. Legion is the sole surviving triplet of a set of boys who were very badly abused by their father and grew up to be serial killers. Not to worry, though; in Legion’s mind, his brothers are very much still with him. You’re going to spend a lot of time inside Legion’s head in this novel, and I found that fascinating. Next, we have Sheldon Steward—not Stewar*t*; don’t mess that up, or Sheldon will become very upset with you—who is a kind of homage to Bret Easton Ellis’ iconic serial killer Patrick Bateman in American Psycho, updated for the age of social media and influencers. Needless to say, having a narcissistic hitman serial killer with a bad case of the Dunning–Kruger effect who has modeled his life after what people like Kim Kardashian and Tom Cruise have advised their fans, is both horrifying and hilarious, offering some much-needed humor to leaven an extremely dark story. Then we have Danielle Smith, a young criminal defense attorney who, along with her fiancé Alex Anton, has been abducted by Sheldon and delivered to Marcos, a Russian mobster who has set up a drug factory-fortress for reasons that are initially unclear. Danielle is the only really sympathetic character here, as we soon learn that her fiancé Alex has a very, very dark past of his own. Danielle has got to quickly come to terms with that, then figure out how to survive with body, mind, and soul intact.

Novels like this hinge on characterization to be successful: either you find the killers and their victims interesting, in which case you love getting inside their heads, or you find them mundane or uninteresting, in which case the plot doesn’t matter because the characters and their travails don’t matter. Fortunately Collings excels at building good characters—and by “good characters” I mean unspeakably awful but deeply interesting ones. That’s good because the reader spends a lot of time inside the heads of the two dueling killers, Legion and Sheldon, as well as Danielle, the only really good person in the story. We also get backstories galore, especially for Legion (which is important, because he was the antagonist of Strangers and readers of that book will certainly want to know how he ended up hunting, torturing, and killing his victims), Danielle, and her fiancé Alex, who is far more than he seems, much to Danielle’s regret.

Action and pacing are tight. There’s a genuine sense of menace and suspense throughout; this is a book that genuinely is hard to put down. If you like serial killers as antagonists in your horror thrillers, you’ll want to check this one out. Stranger Still has got some genuinely original killers here, and you get to plumb the depths of what these sickos are all about. This isn’t a run-of-the-mill police procedural as many of the novels in this sub-genre tend to be though, with a valiant but flawed FBI profiler chasing a killer—this is the story about what happens when an ordinary person gets caught in the middle of four insane killers who aren’t going to stop until there’s only one left. Not for the faint of heart but definitely recommended. If you like the work of authors like J.A. Konrath, you’re going to like this one.