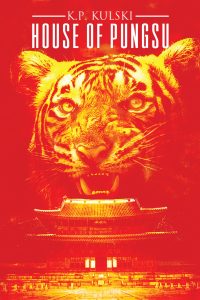 House of Pungsu is a difficult property to summarize. It is like trying to describe a delicious smell or a captivating painting. The plot feels like a specter that one catches out of the corner of one’s eye: it is provided piecemeal but unites satisfyingly at the end.

House of Pungsu is gloriously evocative. The narration is composed of poetic and haunted first-person accounts of the women who live out an eternity in a palace comprised mostly of locked doors. The women are a daughter, mother, and grandmother. The daughter cannot remember her identity or how she came to live in the locked rooms. Her grandmother helps her to remember by telling her a story of a woman who is sent on a quest to retrieve a tiger’s whisker.

The characters are stuck in a house that never changes. The characters also never change until the daughter begins to menstruate. Since there is no aging or changing in their world, this rite of passage is cause for confusion and possibly alarm.

The story has many strengths in its favor. First, the descriptions of the palace, clothing, pottery, and artwork are precise enough to have a photographic quality. I felt as if I were walking the palace halls, tracing the walls, feeling the clothes and shards of pottery. Second, the theme of losing one’s identity in relationship to others is relatable and the resolution is rewarding. The theme pulls the separate narratives together until the complete picture is clear at the end. Third, I was sold by the tiger on the cover (I will read anything that even barely mentions a tiger). We are in another year of the tiger, and the assigned characteristics of bravery, confidence, and unpredictability can be aptly applied to both the characters in the story and the risks the author took.

Most impressive was Kulski’s treatment of women’s life cycle. Menstruation is viewed as both an act of killing the wild beast within and also transforming into the beast itself. Marriage and motherhood are either losses of the self or a remembrance of ones’ powerful and savage roots. Being a woman of a certain age, I connected with the internal debate the characters had over how to approach each developmental stage.

I am a fan of House of Pungsu. It is an unusual story but one that is worth reading.