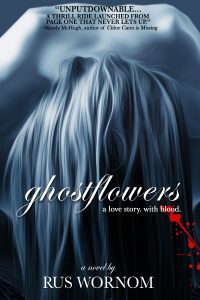 Some books really take you back to a particular place and time and make you feel as though you were there. Rus Wornom’s Ghostflowers is such a novel. Ghostflowers is set in the summer of 1971, centering on the July 4th weekend, in Stonebridge, Virginia (as far as I can tell, a fictional small town near Natural Bridge in the western part of Virginia). It’s clear that Wornom is a native Virginian who’s been around the block as long as I have, and that shines forth in ways big and small throughout the novel. Though it’s set just a few years before my time, I do remember the late ‘70s in Virginia, and well, Wornom has nailed that place and time like very few other writers have. As a small example of this, he gets the names of the drugstores and other stores right, and we’re talking about small regional chains that haven’t been around for decades. I mean, who remembers Miller & Rhoads department stores, or Peoples Drug Stores? (I do, because I was dragged to Miller & Rhoads for clothes shopping back then and worked at a Peoples in high school.)

I know we tend to say this a lot for authors who delve deeply into a particular geographic or temporal setting, but I really mean it for Ghostflowers: The place and time, including the music of the era, are as much characters in the novel as anything else. On a musical note—the music of the time is threaded throughout the novel, so this is important—I’d be remiss if I didn’t mention that Wornom has compiled a YouTube playlist for the novel. I love that he did this and yes, I’ve now worked my way through the entire (120+ song) playlist. This pretty much perfectly captures the music and tone of 1969-71. It’s available here.

Ghostflowers is a work of supernatural horror, but because I haven’t seen the actual revelation of what’s going on here in any of the novel’s promotional materials, I’m not going to spoil the surprise either. But here’s what I can tell you about the plot. Summer Moore is a twenty-year-old diner waitress with a boyfriend who’s head over heels for her and a horribly controlling mother. Summer’s not happy with her lot in life and seeks escape. Into her life comes a biker and Vietnam vet calling himself James Trager, who soon disrupts every aspect of Summer’s life, but in a good way. He awakens unrealized passions in Summer and inspires her to finally act on her dissatisfaction with the status quo about her likely lot in life (waitressing until her boring high school boyfriend asks her to marry him, then some other unsatisfying job until she starts having babies). Trager himself has a…complicated past, and brings the attention of the local sheriff—a small-minded paranoid who becomes increasingly violent and unhinged—on both himself and Summer. Violence, tragedy, and transformation follow.

The plot, action, and characterization are all superb. Wornom’s got an interesting take on what could have been a too-familiar set of supernatural tropes, so it remained fresh. Like the zeitgeist of 1971 that he evokes, Wornom’s characters are richly detailed; even minor characters come to life at Wornom’s hands and produce a vibrant setting and sense of verisimilitude.

Wornom clearly has another book in him about these characters, and while Ghostflowers wraps up this chapter of these characters’ lives satisfactorily, there’s enough here for much more. I’d certainly like to see him write that sequel he telegraphs at the end of the book. Highly recommended.