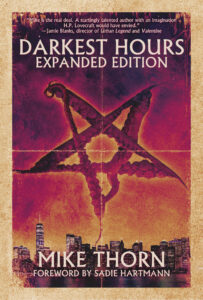 Mike Thorn is an author and film critic who’s new to me, but after having read Darkest Hours: Expanded Edition, it feels like I already know him well. I love what he’s done here: this is an eclectic collection of sixteen short stories and seventeen essays on horror cinema that covers everything from slashers and body horror to the Satanic panic to quiet psychological horror to cosmic weirdness. There’s something here for everyone, and—a rare achievement!—not a single dud among the stories and essays.

Because there is so much packed into this volume, I can’t provide thoughts on all thirty-three pieces, but here are a few thoughts on stories I found especially effective:

One of Thorn’s strengths as a writer is his ability to write compelling horror tales involving teenage protagonists. We see this in “Mictian Diabolus,” a wonderful callback to classic slasher films that involves a group of high school punks breaking into an abandoned school; “A New Kind of Drug,” in which a cool high school rebel shows his new friend how he likes to get high, and opens up a world of suffering for both of them; and “Choo-Choo,” about a dark night when two boys go to a desolate train yard, and what befalls them there, among several other stories like this. Lots of adult writers try (and fail) to recapture the life of teenagers, but Thorn really nails it.

Some of Thorn’s stories involving academics—and the inherent horrors of academia—were especially effective (I say that as a former academic who finds the subject ripe for existential horror!). In “Fear and Grace,” Justine is a young scholar who meets her old high school friend Herbert at a conference and is reminded of why they stopped being friends. This one was especially terrifying to me because I’ve known some people like Herbert. It’s a powerful example of how subtle horror can be—no supernatural or even murderous events are needed to evoke chills. In “Sabbatical,” one struggling graduate student comes to understood how one of his peers experiences such apparent success, and well, the cost of that success is pretty shocking. It was also fun seeing Thorn’s depictions of academics in “Speaking of Ghosts” and “Lucio Schluter,” about, respectively, a conversation between two academics about the ghost that lives in the storage room and how hero worship of a famous sculptor can go terribly wrong. Both really captured the voices and petty politics of academia.

There’s a lot more to enjoy in the collection, but these stood out especially prominently to me. One of the elements I most appreciate about short story collections are author notes—as a reader I always feel like it’s a missed opportunity not to include some final reflections from an author on the stories you just read. Thorn has done a wonderful job of including substantive author’s notes with each story that detail the themes he was trying to address, the mood he was trying to evoke, and his likely influences (as with many authors, no matter how self-reflective one might be, it’s not always possible to retroactively determine exactly what inspired a story idea). Thorn is extremely well-read, and his recommendations for further reading based on his story influences are excellent. This was a terrific addition to the collection.

As I mentioned, there are two halves to the collection: the first is Thorn’s fiction output and the second his non-fiction. The essays in the latter half of the book offer fascinating insight and discussion of many of the horror films of all of your favorite directors, including: Tobe Hooper, M. Night Shyamalan, Rob Zombie, George Romero, Eli Roth, Wes Craven, Martin Scorsese, and Dario Argento. Thorn’s clearly a smart and knowledgeable guy, and his discussions of horror films and directors are erudite but at no point did I feel talked down to, or that the discussion was flying over my head. He writes about horror cinema from the perspective of a fan as much as a film scholar; Thorn offers commentary about horror cinema the way that your smart friend who’s seen every horror film ever made does, not in a way that’s unapproachable or boring, and that’s very much appreciated. You don’t have to be a film snob to enjoy Thorn’s essays.

Highly recommended—whether Thorn is composing his own horror fiction or opining on horror cinema, he’s a gifted writer and craftsman of the written word, and I very much look forward to much more from him.